The result at Munich's Allianz Arena means second-placed RB Leipzig can draw level on 24 points with Bayern if they win at home to mid-table Mainz on Sunday.

It was a fine result for Hoffenheim, who remain unbeaten this season under their 29-year-old coach Julian Nagelsmann.

But the day belonged to Aubameyang, who redeemed himself for a reported midweek indiscretion with four clinically taken goals as Dortmund won for the first time in five league games to go fifth.

According to German media, Aubameyang had been suspended by coach Thomas Tuchel for Wednesday's 1-0 Champions League win at home to Sporting Lisbon after he had jetted to Milan with friends on Monday.

But all seems to have been forgiven in Hamburg as the Gabon striker celebrated his first goal with Tuchel amidst plenty of smiles.

'Auba' needed just 27 minutes to score his first three goals and hit his fourth after the break.

"I made a mistake and I had to apologise. I have already said 'sorry' to the team and the coach," Aubameyang told Sky.

"I needed to render my services to the whole team and the coach, who I get on very well with."

Borussia's pressing then forced Hamburg captain Johan Djourou into a mistake, and Turkish teenager Emre Mor pounced to present Aubameyang with a simple tap-in on 23 minutes.

A clearance from Hamburg goalkeeper Rene Adler was returned with interest by Marc Bartra, who put Aubameyang away for his third.

It was 4-0 three minutes after the break when Christian Pulisic pounced on a loose ball and fed Aubameyang, who drilled a superb shot into the bottom-left corner. 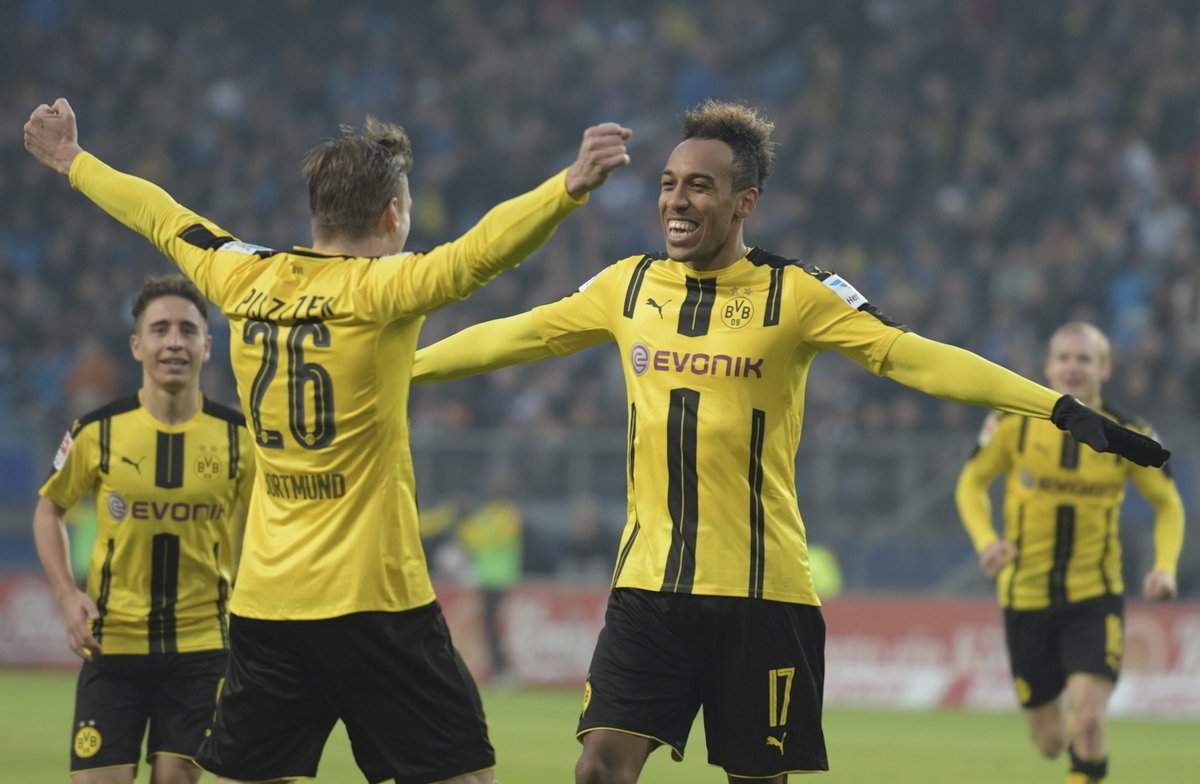 Hamburg pulled two goals back through Nicolai Mueller, who netted their first goal in 717 Bundesliga minutes dating back to September 10, but Ousmane Dembele came off the bench to net Dortmund's fifth late on.

This was a woeful Hamburg display and not what Germany legend Uwe Seeler wished for on his 80th birthday as he watched his ex-club's eighth defeat in 10 league games.

WOLFSBURG BACK ON TRACK

In Munich, Bayern were denied a sixth straight win by third-placed Hoffenheim, who preserve their unbeaten record this season.

Hoffenheim's Kerem Demirbay beautifully timed his arrival in the box to smash Nadiem Amiri's pass into the top-left corner on 16 minutes, but the lead did not last.

When Douglas Costa fired in a cross, Hoffenheim midfielder Steven Zuber deflected the ball between his own goalkeeper's legs for an own goal on 34 minutes with Bayern's Robert Lewandowski waiting at the far post.

Bayern, who were playing in jerseys made from recycled rubbish from the sea, saw their luck desert them as they fished for the winning goal.

Both Mats Hummels and Thomas Mueller hit the woodwork in the last five minutes.

Having beaten Tottenham Hotspur away in the Champions League in midweek, Bayer Leverkusen enjoyed a 3-1 win over Darmstadt with goals by Hakan Calhanoglu, Julian Brandt and Charles Aranguiz.

Wolfsburg shot up out of the relegation places to 13th with a 3-0 win in pouring rain at ten-man Freiburg as Germany striker Mario Gomez scored twice while Ricardo Rodriguez converted a late penalty.

It was Wolfsburg's first win since the opening day of the season.

On Friday, fourth-placed Hertha Berlin won 3-0 at home to jaded Borussia Moenchengladbach as Salomon Kalou scored a hat-trick for his first goals since April.

The Ivory Coast forward welcomed his first goals since losing his father in August, two weeks before his aunt also passed away.

"It's a relief with all the difficult situations I've had to deal with," he said.