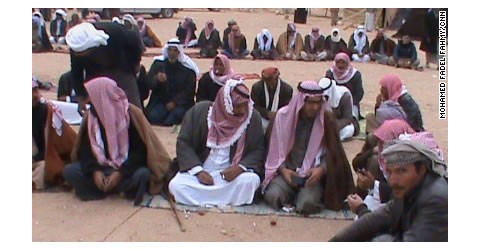 At a meeting last Friday in the south Sinai desert, Bedouin leaders accused the Supreme Council of the Armed Forces of treason against Egypt and warned that — if necessary — they might take up arms to achieve greater representation in the nation’s new parliament.

At a venue not far from the ancient St. Catherine’s monastery, amid Sinai’s imposing granite mountains, top Bedouins gathered to protest what they decried as “forged parliamentary elections” and a political system they claim historically has left them marginalized and oppressed for decades.

“We will not allow a parliament without Bedouin representation (as determined by) elections … forged through the alliance between the Supreme Council of the Armed Forces and a certain Islamic party,” yelled Ahmed Hussein, a member of the Kararesha tribe.

A prominent Bedouin blogger, Musad Abu Fajr, took to the stage to proclaim: “All our framed prisoners in Egypt will be released.”

“The military junta has committed treason against Egypt. They forgot how we assisted them against the Israelis in the 1973 war for Sinai,” he added. “But we will regain our rights peacefully.”

Some Bedouins’ complaints about the integrity of the electoral process have been challenged in court.

One tribal leader, Mohamed Al Ahmar, told the meeting that “we discovered the burnt boxes at Al Tor city in South-Sinai polls containing most of our Bedouin votes! We are not sure who burned them, but it’s the military’s responsibility.”

The destruction and burning last week of several ballot boxes prompted an administrative court to order a re-run of voting in parliamentary elections in South Sinai on Saturday and Sunday.

Al Ahmar said that when Bedouins challenged the results outside the court in the Sinai town of Al Tor, security forces fired tear gas and warning shots in the air to disperse them.

The protesters blocked the main road to the resort of Sharm el-Sheikh for a while, Al Ahmar said, “but we restrained ourselves from firing at (the military) directly.”

Nearly 500,000 Bedouins live in the Sinai peninsula. They have frequently functioned beyond the control of Egypt’s central government in a remote desert area where smuggling, human trafficking and arms dealing are common.

During President Hosni Mubarak’s rule, thousands of Bedouins were given jail sentences. Many claim they were framed by the now-dissolved state security apparatus and wrongfully imprisoned.

Bedouin tribal members have helped get drugs, food, building materials, cars and even African refugees into the Gaza Strip, a part of the Palestinian territories that borders the Egyptian Sinai, through underground tunnels.

Some Bedouins are fugitives from Egyptian authorities. One of them last week detained for three hours about 50 British, German and French tourists who were visiting St. Catherine’s monastery until the authorities convinced him to free them.

“I let them go after police officers promised to bring over a member of the ruling military Supreme Council to discuss our demands,” the Bedouin fugitive told CNN.

A popular tourist destination, the monastery was built in the sixth century on the site where Moses is reputed to have seen a burning bush.

“The poor tourists were so scared, and we have not seen many visitors since that incident,” Avanov Asem, a curator at the monastery, said.

At the recent meeting, some Bedouin leaders made claims about having smuggled weapons from Libya into Gaza. CNN and Human Rights Watch reported last September about the disappearance of hundreds of surface-to-air missiles from military warehouses in Libya during the uprising against Moammar Gadhafi’s government.

“We have smuggled thousands of shoulder-launched (surface-to-air) SAM missiles to Gaza through the tunnels for a transporting fee only,” a Bedouin leader from Tarabeen tribe told CNN.

But not all those weapons may have gone to the Palestinian territory. The same man claimed Bedouins would turn some of those weapons against Egypt’s military-led government unless their demands were met.

“We saved some for us … stockpiles of RPGs, machine guns. And I personally have ten 14.5 mm anti-aircraft guns that I bought at $12,000 a piece.

“We have declared war against the military and will not wait for them to kill us all,” he said.

There is no way to verify the tribal leader’s claims, but an Egyptian national security officer, Usama Emam, told CNN that weapons from Libya and Sudan had arrived in Sinai by sea.

Another military intelligence official told CNN: “There are advanced anti-tank missiles that come to Sinai and go to Gaza through tunnels, but I don’t have information on the SAMs coming through.”

In the past year, the pipeline carrying gas across the Sinai to Israel has been sabotaged at least ten times. Egyptian officials have blamed Bedouin militants for the attacks. And the Egyptian military has sent thousands of troops to the Sinai peninsula in the face of a growing threat from Islamist extremists belonging to the Takfir-Wal Hijra group. Egyptian intelligence officials are also concerned that cells sympathetic to al Qaeda may be emerging in the region.

Bedouin leaders in western Egypt say that clashes erupted last Friday between the military and members of the Gemaet tribe on the main coastal road to the border with Libya. The violence occurred near the city of Mersa Matruh, as Bedouins tried to reclaim land that had been confiscated.

The Mubarak government had built a fence around the site and planned to use it for the construction of a nuclear power plant, according to Khamis Elwani, a tribal leader.

“After noon prayers … thousands of our men attacked around 300 army soldiers with dynamite sticks and machine gunfire and destroyed the 15-kilometer brick fence holding us back, ” Elwani told CNN.

“We had not received compensation for this land, and we fought for it until the military retreated and the police took over,” he said.

General Hussein Fekri, head of security for Mersa Matruh, confirmed that the military retreated and police have been deployed to the site. He added that Bedouins would remain on the land after newly elected parliament members promised to bring up the topic when the first session of Egypt’s new parliament convenes January 23.

“It’s their land, and they received minimal compensation for it; and they also do not want a nuclear plant on their doorstops in fear for their children. I understand them,” Fekri told CNN.

Elwani threatened that Bedouins would take similar action to reclaim land close to the Hacienda beach resort on the Mediterranean coast “if the military does not respond to our peaceful request.”