A Slovenian designer frustrated with constantly having to re-tuck his shirt into his pants has created a garter-belt-like shirt holder for men that keeps the wearer’s shirt tucked in at all times.

The S-Holder is work around the thighs and attaches to the shirt via metal clips.

“I came up with the idea because I hated having to re-tuck my shirt all the time,” said 21-year-old Nik Vene, the inventor of S-Holder. “I was always having problems with this, so I did some market research and did not find anything that would help me. This inspired me to create something new, which was beautifully designed and made from high quality materials.”

Vene claims he spent six month turning his idea into a reality, and another five months creating an improved version. The S-Holder has adjustable side straps, new clips and comes in different color options. T

he young entrepreneur is so confident that there is a real demand for something that saves men the trouble of having to constantly re-tuck their shirts that he has recently started a crowdfunding campaign on Kickstarter.

This is actually Vene’s second crowdfunding campaign, after he successfully reached his goal for the original T-Holder, last year. A lot of people apparently loved the idea, but also made some potential improvement suggestions, which resulted in the new S-Holder.

Now he’s back on Kickstarter asking for some more money, and men are more than glad to give it to him. With 54 days to go, the S-Holder campaign has already surpassed its $5,000 goal, raising an impressive $20,081 (at the time of this writing) from 553 backers. 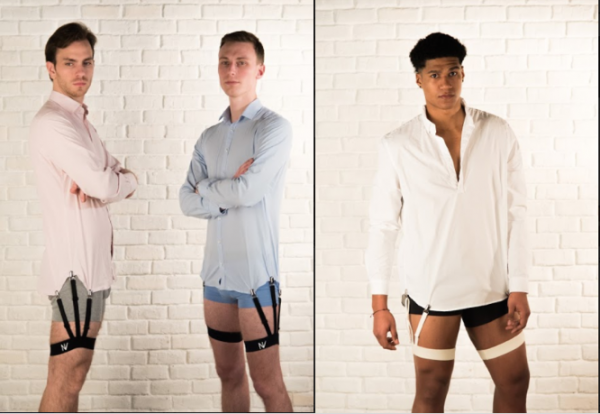 “We have already satisfied people of many professions, from lawyers, managers, CEOs, and accountants, to waiters and professors,” Vene said. “I feel amazing when I get positive customer feedback. It’s very nice to get an order, but for me it’s much more important that the customer feels satisfied with our product.”

I for one find the success of the S-Holder very surprising. It’s not that I don’t see it’s usefulness, especially as a guy who always struggles with keeping his shirt tucked in, but it’s just that we’ve had similar products for years.

Shirt Stays, for example, do essentially the same thing, only they connect your shirt to your stuck, thus keeping the shirt tucked in and the socks pulled up at the same time.

People in the military have apparently been wearing this kind of thing for decades. There are also dozens of accessories very similar to S-Holder on sites like Amazon or Alibaba.