‘Berekum’s transformation; a result of your leadership’ – Berekum Omanhene to Akufo-Addo 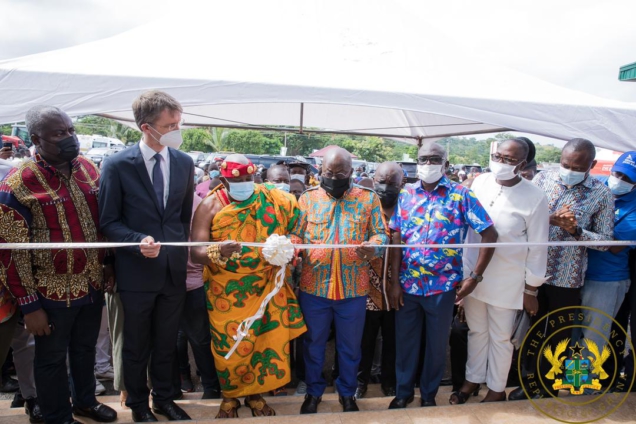 Omanhene of Berekum Traditional Area, Dasebre Dr Amankona Diawuo III, has praised President Nana Akufo-Addo for superintending over the transformation of Berekum since he assumed the reins of office in January 2017.

Dasebre Dr Amankona Diawuo III made this known on Tuesday, when the President, as part of the latter’s two-day working visit of Bono Region, paid a courtesy call on him at his palace at Berekum.

“I cannot stop thanking the President. When I drive through Berekum township, I always say, ‘had it not been Nana Addo Dankwa Akufo-Addo, where would Berekum have been’? Before the NPP came into office in 2017, Berekum town roads were in a deplorable condition,” he said.

The Berekum Omanhene recounted a visit to Jubilee House in 2019, where he appealed to the President to help fix the road network in Berekum, as a fitting testament to the fact that the town is a stronghold of the ruling New Patriotic Party.

“The President assured me that in two or three weeks, work will begin. So, true to his word, work began, and it has been a happy experience so far for residents of Berekum and all motorists.

“This is because he promised that 14km of inner Berakum streets will be asphalted, and it has been done. So God richly bless him”, Dasebre Dr Amankona Diawuo III said.

He also applauded the President for overseeing the ongoing construction of roads in Berekum and adjoining towns under the Sinohydro Facility and the completion of the first phase of the “Thursday Market”, which is the major market for residents of the town.

On the President’s pledge of ensuring an even spatial spread of industries across the country, through the 1-District-1-Factory policy, which will promote rapid industrialisation at the district level, driven by strong linkages to agriculture and other natural resource endowments, to create jobs and wealth, the Omanhene indicated that this has been realised in Berekum through the establishment of the $16 million WEDDI Africa Tomato Factory at Domfete.

In addition, a model farm and research centre designed to conduct seed trials and train farmers on best farm practices and an agric-input Shop to supply inputs to the farmers at affordable prices have been established by the company.

Additionally, 2,400-acre farmland as a nucleus farm has been set up by Weddi Africa, with the company also spearheading the establishment of a Tomato Outgrower Farmers Association in Tano North and Berekum West districts, with 2,000 registered farmers from Ahafo and Bono regions.

Touching on Agenda 111, the pledge to construct a district hospital in 101 districts across the country that do not have district hospitals, Dasebre Dr Amankona Diawuo III indicated that this will become a reality in Berekum West, precisely at Domfete, and at Kutrie no.2. in Berekum East.

“We thank President Akufo-Addo and the NPP for these developments. We also have to applaud him for the fight against Covid-19. We know we still have active cases, but when you compare our situation to those pertaining to other countries, you will acknowledge that God has been good to us. This is because of the leadership provided by the President. We thank you, Mr President,” he added.

He, nonetheless, urged the President to help ensure the vaccination of all Ghanaians against Covid-19, as this is the surest way of returning the lives and livelihoods of the population to normal.

At Wamfie, the President inspected ongoing work on the Wamfie-Adiembra road, an important inter-district road that links some 10 communities from the Dormaa East District to the Sunyani East District.

DISCLAIMER: The Views, Comments, Opinions, Contributions and Statements made by Readers and Contributors on this platform do not necessarily represent the views or policy of Multimedia Group Limited.
Tags:
Berekum Omamhene
Dasebre Dr. Amankona Diawuo III
President Nana Akufo-Addo