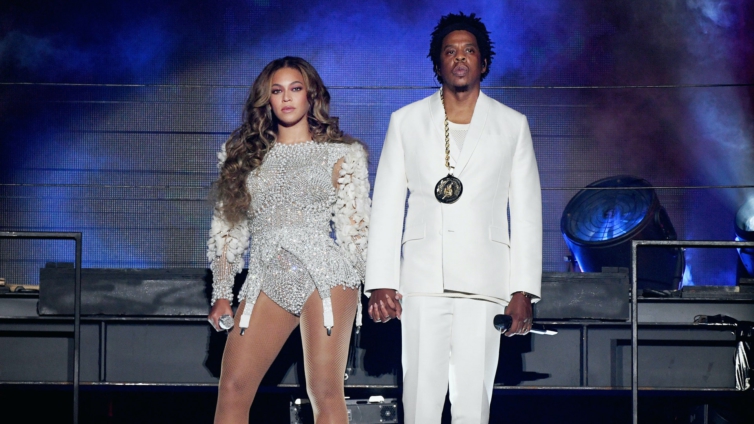 If someone asked you to name the power couple of the music industry, it’s likely you’d think of Beyoncé and Jay-Z.

Since their musical partnership arrived with “Crazy In Love” back in 2003, it was clear that they were musical icons.

But so too were they style icons, seizing every public opportunity to communicate a shared love of sharp couple looks.

That point has been proven right through to this year, when the pair are still setting the style bar impressively high.

Today, Beyoncé celebrates her 39th birthday, so we’ve sourced their most iconic fashion outings to date and, more importantly, the style lessons to take from them.

Over to our artists of the century…

Why it works: We had to nod to the noughties.

This combo for the 48th Grammy Awards was eye-catching: the pair stuck to the simple shades, but added a healthy dose of pizazz through accessories.

As for the attire, the neckline structure of his lapelled blazer, paired with her halterneck gown, go hand in hand.

Pastels are an outdoor essentials

Why it works: Florals for spring may not be groundbreaking, but pastel can be when it’s styled like this.

Their arrival to the pre-Grammys lunch in February was a head-turner, as both sported a fresh spin on the seasonal hues – Beyoncé making a statement through her sleeve, while Jay-Z mastered the blend of blue and white.

When you’re this much of a power couple, anything goes.

Luckily, their bold styles paid off – the couple later secured a Grammy for album Everything Is Love.

Velvet is a failsafe fabric

Why it works: A black tie event usually results in a fair few suits and gowns, but the real way to nail the formal dress code? Through black velvet.

Jay-Z and Beyoncé are masters of it, and perfectly demonstrated the power of the tufted texture at Sean Combs’ 50th birthday party last year.

For Beyoncé, a stunning structural gown (complete with jewels, might we add) was matched with long velvet gloves: very sophisticated and very stylish.

As for Jay-Z? He matched his single breasted blazer with a simple satin bow tie, and the result was as cool as it was classic.

Why it works: Gothic romanticism is a pretty frequent theme embraced by Beyoncé and Jay-Z, but this outing to the 56th Grammy Awards really hit the style spot.

The pair approached texture via an elegant approach: her heavily laced gown and his square-embossed suit.

Topped off with a red lip from Beyoncé, this is a couple look we should all attempt to re-create as soon as possible.

Why it works: Met Gala arrivals are always iconic, especially when this couple show up together.

For their 2014 arrival, Beyoncé’s striking Givenchy gown was the perfect partner to Jay-Z’s contrasting tux.

Her black birdcage veil – a dark take on romanticism that was ironically eye catching – really seals the deal.

Why it works: There’s nothing more stylish than a couple who serve total glamour.

Case in point: Beyoncé and Jay-Z, of course, who arrived to the London Premiere of “The Lion King” last year in serious regal style.

That was mostly down to Beyoncé, whose stunning gold gown was right on theme for her latest film role.

Head to toe black is a winner

Why it works: What’s the one couple look that never fails? Head to toe black.

For Tom Ford’s AW15 show, the pair mastered the shade in a look that if they were to wear today would look just as good.

it be through Beyoncé’s heavily embellished attire or Jay-Z’s patent Oxford shoes, this was classic couple power dressing.

mix up your texture

Why it works: When in doubt, bring the velvet out.

This is an eternally graceful look. This Oscars arrival was over 14 years ago and it would work as well 50 years ago as it would today.

Top tip to take, ladies: embrace the material from head to toe, while gentleman should match it with a bow tie.

And keep the silver accessories bold and sparse: diamond earrings and a bracelet for Beyoncé, long lapel pin for Jay-Z.

You both need a suit

Why it works: Suited and booted? It’s a yes from these two, who both embraced two-piece looks while backing Hillary Clinton in Ohio.

Beyoncé opted for spots, while Jay-Z stuck to black, and their shared sharpness was fitting for the campaign event, advocating not only the policies but the pantsuits that we know Hillary Clinton for.

Don’t be scared of a statement

Why it works: We’d confidently call this one of the most iconic arrivals of the decade and the competition for that title is fierce during the first Monday in May. This style moment is a standout, namely because it speaks of confidence and consciousness. These two know how to make a star-studded entrance and it bodes well with the longstanding status of their relationship. Cheers to eleven years.

DISCLAIMER: The Views, Comments, Opinions, Contributions and Statements made by Readers and Contributors on this platform do not necessarily represent the views or policy of Multimedia Group Limited.
Tags:
beyonce and jay-Z
Couple looks