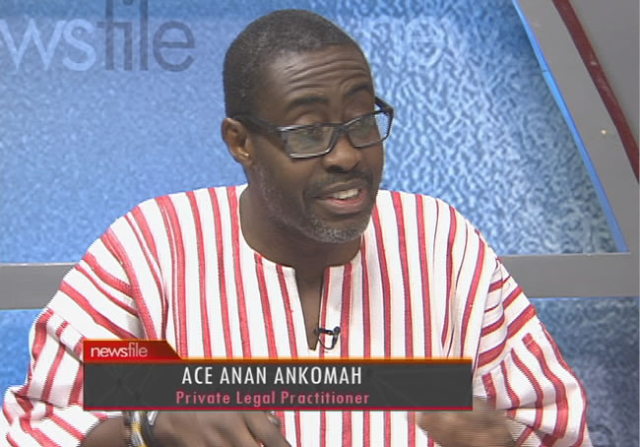 Private legal practitioner Ace Annan Ankomah has said officials of the Bank of Ghana (BoG) breached banking regulations in the manner they dished out liquidity support to some distressed banks that later collapsed.

He enumerated several instances in which the Central Bank officials acted like “a bunch of robots” by breaching their own law to give liquidity support to a bank that was non-solvent.

The renowned lawyer, who has been critical of the banking sector following the collapse of seven indigenous banks, told Samson Lardy Anyenini on MultiTV/Joy FM’s Newsfile programme on Saturday that it is high time complicit BoG staff are jailed.

His comments follow the collapse of seven indigenous banks since last year. First, it was UT Bank and Capital Bank which were close down in August 2017.

One year later, five banks [Sovereign Banks, Construction Bank, Beige Bank, Royal Bank and uniBank] were closed down by the regulator for various reasons leading to the creation of Consolidated Bank of Ghana Limited.

Some of the banks were reported to have used fraudulent measures to get their licenses while others had various insolvency issues.

According to reports, the banks misused the loans given to them by the Central Bank to save them from collapse.

Citing another breach by the Central Bank for supporting the collapsed banks with the taxpayer's money and not following due process, the legal practitioner said the BoG officials uncollateralised loans they advanced to the struggling banks.

“You cannot give it [liquidity support] without collateral which then means before giving out the money, you must look at the asset base of the entity to see whether it has enough in the event of a breach to cover what you gave them, but that was breached as well,” he said.

According to him, BoG further failed to adhere to the agreement it signed with the troubled bank to provide them with an advisor to check wastage of the money loaned to them.

Mr Ankomah said the Central bank could not have breached its own laws in three instances with the excuse that it was a coincidence.

He believes the action by some officials of the BoG suggests that “a person is able to form a Bank in Ghana on nothing but air, cook commercial paper to get a license.”

Following the closure of the five banks, government provided financial support through the issuance of a ¢5.76 billion bond towards the Purchase and Assumption Agreement under the newly created Consolidated Bank of Ghana Limited.

This was part of efforts to restore confidence and trust in the banking system, and to protect depositors and jobs after the closure of the five banks.