Brazil senators back criminal charges against Bolsonaro over Covid-19 handling 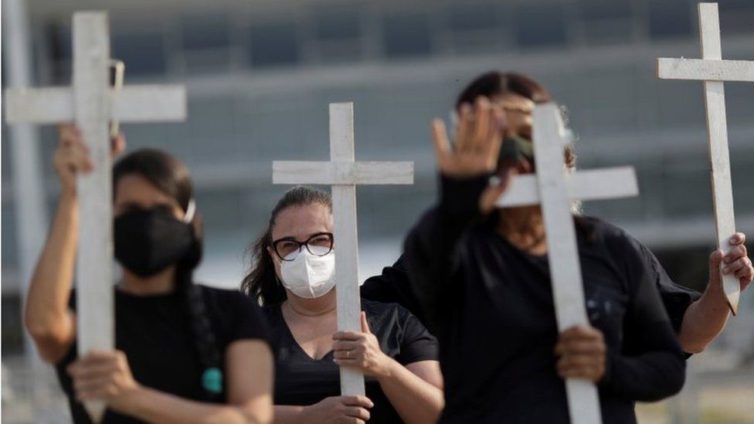 A Senate committee in Brazil has voted to recommend that President Jair Bolsonaro face charges over his handling of the Covid-19 pandemic.

Seven of the panel’s 11 members backed a report calling for nine charges to be filed against Mr Bolsonaro, including crimes against humanity.

The committee chair, Senator Omar Aziz, will send the findings to Brazil’s top prosecutor on Wednesday.

Mr Bolsonaro has maintained he is “guilty of absolutely nothing”.

More than 600,000 people in Brazil are confirmed to have died from Covid, second only to the death toll in the United States.

There is no guarantee this vote will lead to criminal charges for Mr Bolsonaro, as the report’s recommendations must now be assessed by Brazil’s prosecutor-general, a Bolsonaro appointee who is expected to protect the president.

The report alleges that Mr Bolsonaro’s government pursued a policy of allowing the coronavirus to rip through the country in the hope of achieving herd immunity.

In addition to crimes against humanity, the senate committee has recommended eight further charges including incitement to crime, falsification of documents and the violation of social rights.

Mr Bolsonaro is accused of misusing public funds and spreading fake news about the pandemic.

The 1,300-page report also recommended bringing charges against two corporations and 77 other people, including three of the president’s adult sons.

Following the announcement, Senator Renan Calheiros, the centrist politician who was the report’s lead author, said that the “chaos of Jair Bolsonaro’s government will enter history as the lowest level of human destitution”.

The vote concludes a six-month inquiry which has revealed scandals and corruption inside Brazil’s government.

Throughout the process, Mr Bolsonaro has insisted that his government “did the right thing from the first moment” of the pandemic and his allies have been quick to dismiss Tuesday’s recommendations as being driven entirely by “political and electoral” motivations.