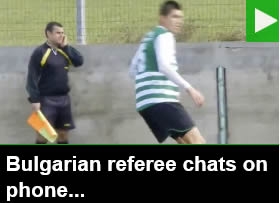 As an eagle-eyed referee's assistant, you have to make sure that you're paying plenty of attention to the game, and that you get all the tough calls right on the money, since your decision can have huge implications on the final result of the game.

One referee in Bulgaria, Georgi Tabakov, decided to take the bit about making the calls a bit too literally after he was spotted on the blower in the recent match between Chernomorets and Cherno, shooting the breeze with someone on the other end of the line.

Tabakov's father Emil works for the Bulgarian football union, according to BGSport.bg, so we have our suspicions that he might not be getting reprimanded for this. Then again, neither team complained about the standard of refereeing, but it's possible that they just didn't know who to call about it.