Burkina Faso's interim leader has dismissed the African Union's imposition of a two-week deadline to hand power to civilians.

"We are not afraid of sanctions, we care much more about stability," said Lt Col Isaac Zida after talks with opposition parties and civil society.

They have agreed to hold elections next year but not on an interim leader.

He was one of three leaders who travelled to the capital, Ouagadougou, on Wednesday for the talks, which led to the one-year transition agreement. 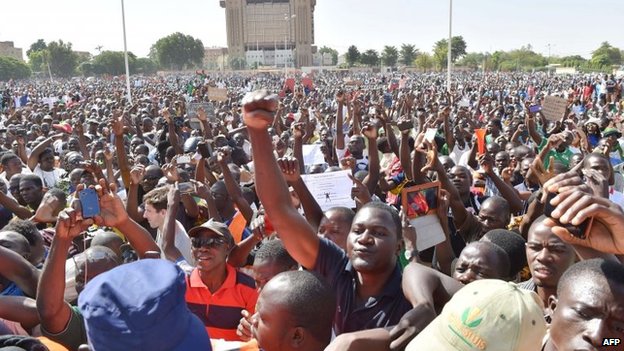 Thousands have protested to demand a civilian-led transition

The talks are continuing as the various parties attempt to agree on a civilian interim leader.

Some opposition parties do not want Mr Compaore's former governing party to be involved in the discussions.

Col Zida has agreed to hand over power to civilians but late on Thursday said he was not concerned by the African Union deadline.

"We have waited on the African Union in moments when it should have shown its fraternity and its friendship but instead was not there," he said.

"It's unfortunate but it's not too late."

Ghana's President John Dramani Mahama has said he thought the threat of sanctions would be avoided.

"I am certain that we will not reach the stage where the international community will have to impose sanctions," the AP news agency quotes him as saying.

The AU sanctions could include suspension of Burkina Faso's AU membership and a travel ban on military officials. The AU's Peace and Security Council is expected to meet again later this month to discuss the crisis.

Under Burkina Faso's constitution, the head of the National Assembly should take office if the president resigns.

Col Zida was previously second in command of the presidential guard.

Mr Compaore first seized power in a coup in 1987, and went on to win four disputed elections.

The protests were triggered by his plan to amend the constitution so that he could run for office again in elections next year.