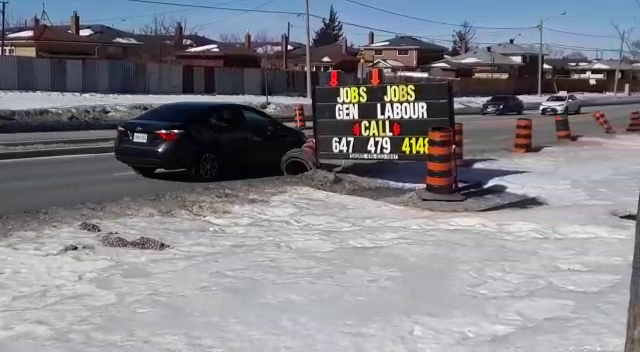 Six weeks into the year 2022 and many of the manufacturing companies, service providing agencies, and the entire industries in Canada remain silent.

But employment agents advertise for job openings every day, encouraging the unemployed to come forward and apply for jobs only to be told: “working soon, application process still ongoing.”

Employment agents in the City of Toronto erect billboards by the shoulders of the roads, pavements on walkways and hang posters on bus shelters and public notice boards, creating the impression job positions abound in Toronto.

Meanwhile, on February 4, 2022, Statistics Canada disclosed that the country lost 200,000 jobs in the previous month alone due to strict public health protocols that were in place to curve the spread of the deadly virus Covid-19 and now Omicron variant.

Accordingly, the job losses raised the unemployment rate to 6.5 per cent in the previous month compared with 6.0 per cent in December last year because of temporarily laid offs and promised to start working soon told people who needed to work.

According to Statistics Canada, the Province of Newfoundland and Labrador recorded the highest unemployment rate with 12.8 per cent, followed by Prince Edward Island 9.6 per cent, New Brunswick 8.5 per cent, Ontario 7.3 per cent, and Alberta 7.2 per cent.

As the industries remain silent, employment agencies keep advertising for job openings and Statistics Canada reports of job losses; the great question many residents are asking is where are the jobs?