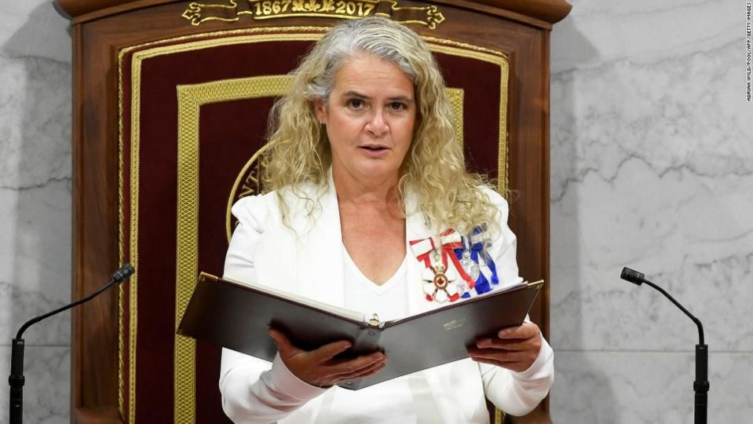 Julie Payette, a former Canadian astronaut and the country’s governor general since 2017, announced she would step down Thursday after she was accused by current and former employees of creating a “toxic” workplace environment.

In a detailed statement, Payette said that she took the allegations seriously — although she did not formally apologize or admit to any misconduct in the workplace.

“While no formal complaints or official grievances were made during my tenure, which would have immediately triggered a detailed investigation as prescribed by law and the collective agreements in place, I still take these allegations very seriously,” Payette said in the statement.

Julie Payette, a former Canadian astronaut and the country’s governor general since 2017, announced she would step down after she was accused by current and former employees of creating a “toxic” workplace environment https://t.co/1Ne4YYBGMk

As first reported by the Canadian Broadcasting Corporation (CBC) last year, current and former government employees accused Payette of creating a toxic workplace, harassing and bullying employees and reducing some employees to tears.

In response, the Trudeau government hired an independent consulting company to investigate the allegations. The report was completed and submitted to the government earlier this week and that prompted Payette’s resignation.

“I am a strong believer in the principles of natural justice, due process and the rule of law, and that these principles apply to all equally,” Payette wrote. “Notwithstanding, in respect for the integrity of my vice-regal Office and for the good of our country and of our democratic institutions, I have come to the conclusion that a new Governor General should be appointed. Canadians deserve stability in these uncertain times.”

Canada’s prime minister released his own statement Thursday, saying he had received Payette’s resignation. Trudeau did not confirm any of the allegations leveled at Payette. However, in the brief statement, he did not thank her for her service.

“Every employee in the Government of Canada has the right to work in a safe and healthy environment, and we will always take this very seriously,” Trudeau said in a statement. “Today’s announcement provides an opportunity for new leadership at Rideau Hall to address the workplace concerns raised by employees during the review.”

Trudeau said Canada’s chief justice will fulfill the duties of governor on an interim basis until he makes a recommendation on a replacement to Queen Elizabeth.

Had Payette not agreed to resign in light of the workplace investigation, dismissing her could have triggered a constitutional crisis in Canada, and would have mandated more formal involvement by the Queen.

Government officials told CNN that the report provided by the independent investigators found the allegations were consistent among employees and the evidence of a toxic workplace was “robust.”

It is not clear whether the results of the workplace investigation will be made public.

Payette said in her statement of resignation that, “Everyone has a right to a healthy and safe work environment, at all times and under all circumstances. It appears this was not always the case at the Office of the Secretary to the Governor General. Tensions have arisen at Rideau Hall over the past few months and for that, I am sorry.”

However, later in the statement she added, “We all experience things differently, but we should always strive to do better, and be attentive to one another’s perceptions.”

That appeared to echo similar language used by Trudeau. In 2018, CNN reported that in response to allegations that he had inappropriately groped a woman in 2000, Trudeau said during a press briefing that, “I do not feel that I acted inappropriately in any way but I respect the fact that someone else might have experienced that differently.”

Canada’s prime minister is tasked with recommending a candidate for governor general for appointment by Queen Elizabeth. In 2017 when he recommended Payette, Trudeau said she was “unquestionably qualified for this high office.”

But Canada’s opposition leader, Erin O’Toole, accused the prime minister’s office of not vetting Payette thoroughly for the job. He said all political parties should now have a say in who replaces Payette.

“The Governor General is the Commander in Chief of our Armed Forces and has an important constitutional role,” O’Toole said in a statement to CNN. “Considering the problems with his last appointment and the minority Parliament, the Prime Minister should consult opposition parties and re-establish the Vice-Regal Appointments Committee.”