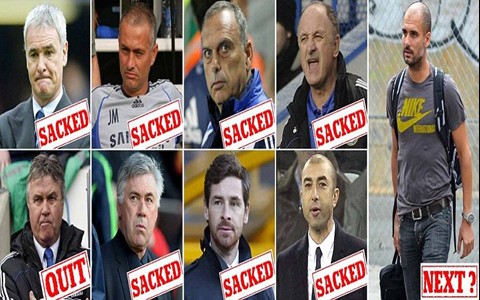 He only had the transitional Blues four points from the summit of the league table and certainly not playing any worse football than the rest of Britain’s flawed elite.

But make no mistake, this is Chelsea—Roman Abramovich’s club.

There is no room for failure at Chelsea. Silverware amassed didn’t cut Jose Mourinho or Carlo Ancelotti any slack, so why should Di Matteo be any different?

If Abramovich believes his club aren’t genuine contenders for the league title, severance payments be damned, revolution version 12 is coming.

If his club doesn’t at least make the semi-finals of Champions League competition, the goods in the shop window start to look a lot more appealing than the in-house furniture.

It makes no difference that the team is only in the Champions League because of results achieved under Di Matteo—immediate success is what counts.

There’s a reason the Italian was offered a mere one-year contract in the summer. While it may be a slight exaggeration to suggest the Russian owner expected him to fail, there never seemed to be much trust between the two.

European glory only delayed the Italian’s unavoidable fate—the one-year contract was more of a reluctant “thank you” for services rendered rather than an expression of faith.

This is not to wholly disparage Abramovich, though. Chelsea are only disappointed to be facing Champions League elimination rather than just glad to be in the thing because of his money and backing.

If he wants to hire and fire more often than a Serie A president, then that’s his lookout. Chelsea Football Club stopped being a democracy behind the scenes long ago.

His purchases this summer were, for the most part, forward-thinking and with positive intent.

He wants an attractive, continental game played at Stamford Bridge, and though that’s what was delivered through August and September and even in parts of October, he clearly doesn’t feel Di Matteo is the man to deliver this long term.

Pep Guardiola, on the other hand, may just be.