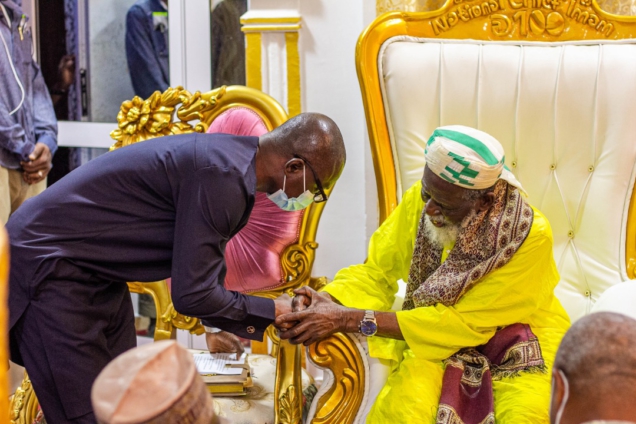 The formal meeting, according to Mr Kum, is to officially introduce himself to the religious leader of the Islamic community as the newly appointed person to helm the affairs of the Chieftaincy and Religious Ministry.

In his engagements, the Minister raised concern about the increase spate of immoral activities amongst citizens particularly the youth.

Citing the recent money ritual murder at Kasoa and the advocacy to legalise the practice of Lesbian, Gay, Bisexual, Transgender, and Queer (LGBTQ+) in the country, the Minister requested the support of Sheikh Sharubutu and his advisors to intensify their education and advise on upholding morals and values.

The Minister stressed that the “satanic” activities are against “the principles of Christianity, the principles of Islam, and the culture that we exercise in this country do not support these thing,” as such must be eradicated as soon as possible.

With Muslims all over the world observing the 30-day spiritual exercise of fasting and prayers, Mr Kum reiterated his call for Muslims to pray that Allah heals the world of the pandemic causing havoc in many countries including Ghana.

He also asked for the Muslim Community to pray for Ghana’s leaders in order for peace to prevail at all times.

To acknowledge the National Chief Imam’s charitable projects to support the poor and needy, the Chieftaincy Minister donated a few items and an amount of GH₵ 5, 000 to facilitate impending programmes.

On his part, Sheikh Osmanu Nuhu Sharubutu pledged that the Muslim community in Ghana will perform its role to ensure that the moral standards of both the country and Islam is upheld and observed.

This, according to him will ensure the nation’s customs and values are preserved for posterity.