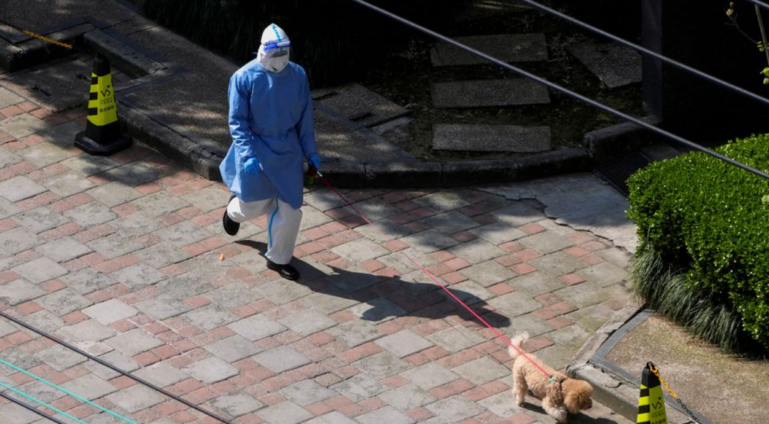 China has sent the military and thousands of healthcare workers into Shanghai to help carry out COVID-19 tests for all of its 26 million residents as cases continued to rise on Monday, in one of the country’s biggest-ever public health responses.

Some residents woke up before dawn for white-suited healthcare workers to swab their throats as part of nucleic acid testing at their housing compounds, many queuing up in their pyjamas and standing the required two metres apart.

The People’s Liberation Army (PLA) on Sunday dispatched more than 2,000 medical personnel from across the army, navy and joint logistics support forces to Shanghai, an armed forces newspaper reported.

More than 10,000 healthcare workers from provinces such as Jiangsu, Zhejiang and the capital Beijing have arrived in Shanghai, according to state media, which showed them arriving, suitcase-laden and masked up, by high-speed rail and aircraft.

It is China’s largest public health response since it tackled the initial COVID-19 outbreak in Wuhan, where the novel coronavirus was first discovered in late 2019. The State Council said the PLA dispatched more than 4,000 medical personnel to the province of Hubei, where Wuhan is, at that time.

The city has emerged as a test of China’s COVID-19 elimination strategy based on testing, tracing and quarantining all positive cases and their close contacts.

The exercise in China’s most populous city takes place on the eve of when Shanghai initially said it planned to lift the city’s lockdown.

The country has 12,400 institutions capable of processing tests from as many as 900 million people a day, a senior Chinese health official was reported as saying last month.

China’s primarily uses pool testing, a process in which up to 20 swab samples are mixed together for more rapid processing.

The city has also converted multiple hospitals, gymnasiums, apartment blocks and other venues into central quarantine sites, including the Shanghai New International Expo Center which can hold 15,000 patients at full capacity.

On Monday, some residents said they received their results on their personal health app just over four hours after they were swabbed in the morning. But in other parts of the city some said they had yet to receive any notification on when their tests would be.

The surge in state support for Shanghai comes as the city is straining under the demands of the country’s “dynamic clearance” strategy, with some residents complaining of crowded and unsanitary central quarantine centres, as well as difficulties in securing food and essential medical help.

Some have begun to question the policies, asking why COVID-19 positive children are separated from their parents and why mild or asymptomatic infections – the majority of Shanghai’s cases – cannot isolate at home.

On Monday Shanghai official Wu Qianyu told a press conference that children could be accompanied by their parents if the parents were also infected, but separated if they were not, adding that policies were still being refined.

A Shanghai resident, who declined to be named for privacy reasons, told Reuters he had been transported to a central quarantine facility on Sunday night after reporting a positive result on a self test more than a week ago.

Another antigen test on Saturday showed he was no longer infected, but authorities insisted on sending him to quarantine, where he has been put in a flat where he has to share a toilet with two other patients, both of whom are still testing positive.

“How is this isolation?” he said, adding that he was now afraid of being re-infected. “I’m not in any mood to do anything right now, I can’t sleep.”

On Monday, videos circulating on the WeChat messaging app showed scores of people rushing to grab bedding and supplies from the dirty floor of what the poster said was a quarantine centre whose premises were still littered with construction materials.

Reuters could not independently verify the footage.

The pressure on the city’s healthcare workers and Communist Party members has also been great, as they work around the clock to manage the city’s lockdown and deal with residents’ frustrations.

Photos and videos have gone viral on Chinese social media of exhausted workers and volunteers sleeping in plastic chairs or on the grass outside housing compounds, or being berated by residents.

On Saturday, the city’s Pudong Chinese Center for Disease Control said it was investigating a leaked recording of a call between a staff member and the relative of a patient, who was perplexed by his father’s COVID-19 test results.

The CDC staff member, who local media identified as an infectious disease expert, could be heard saying exasperatedly that she herself had raised concerns over the current quarantine and testing rules. Reuters was not able to independently verify the recording.

Chinese President Xi Jinping has urged the country to curb the momentum of the outbreak as soon as possible while sticking to the “dynamic-clearance” policy.

On Saturday, Vice-Premier Sun Chunlan, who was sent to Shanghai by the central government, urged the city to “make resolute and swift moves” to curb the pandemic.

The eastern city of Suzhou said it had detected a version of the Omicron BA.1.1 subvariant that doesn’t match any others in the domestic database or the international variant tracking database GISAID, state television reported.

The state-backed Science and Technology Daily said it remains unclear whether the virus is a new sub-branch of Omicron and that the emergence of one or two new versions is normal given the spread of Omicron in China, citing an unidentified expert with a national database.