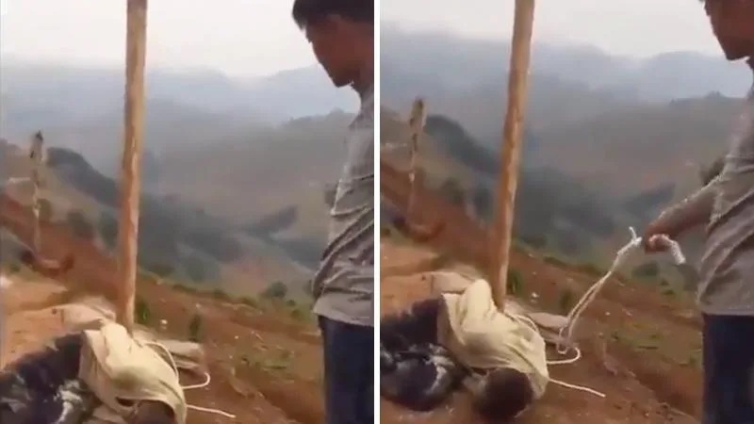 A Chinese businessman was charged with torture and sentenced to 20 years in prison by a court in Rwanda after he was filmed beating a local worker who was tied to a pole last year.

Sun Shujun, 43, is seen in a video yelling at the Rwandan man hunkered on the ground and whipping him with a rope while other men in orange jackets watched.

A Rwandan court sentenced the Chinese man seen in this video, Sun Shujun, to 20 years in prison for brutally beating one of his employees last year. Sun said he was “frustrated and fed up of them constantly stealing minerals.” He has 30 days to appeal: https://t.co/QBWEjHBRbv pic.twitter.com/Es9Yf22U8T

Sun was arrested after the video circulated online in August 2021. He was later released on bail.

Renzaho Alexis, a Rwandan man who is considered by the court to be an accomplice in the beating, was also sentenced to 12 years in prison.

Judge Jacques Kanyarukiga said that Sun had “tortured the victims and issued corporal punishment with malicious intent, and this is a grave crime.”

While prosecutors accused Sun of assaulting four people, he only admitted to assaulting two workers. He said he beat them because he was “frustrated and fed up of them constantly stealing minerals.”

Witnesses told the court that workers suspected of stealing from Sun were tied and whipped.

Sun, a manager of a mine that produces cassiterite in the Rutsiro district, said that his two victims received compensation of more than 1 million Rwandan francs (approximately $1,000) and a reconciliation letter.

Prosecutors, however, argued that the victims only accepted his payments because “they were traumatized and afraid of him.”

“Meanwhile, the Embassy calls for the case to be handled appropriately in a rational, fair and just manner, and requests the legitimate rights of Chinese citizens to be properly protected,” the spokesperson added. “The Embassy will continue to follow the case. The Chinese Embassy remains committed to promoting relations between the two countries and friendship between our people.”

The spokesperson of the Chinese Embassy in Rwanda responds to media inquiries on the recent ruling regarding a Chinese citizen. See the picture below for full text: pic.twitter.com/ZCPKBLHavm

Sun can appeal to a higher court, according to Rwanda courts spokesman Harrison Mutabazi.

DISCLAIMER: The Views, Comments, Opinions, Contributions and Statements made by Readers and Contributors on this platform do not necessarily represent the views or policy of Multimedia Group Limited.
Tags:
Chinese mine manager
Jail Sentence
Rwanda
Whipping