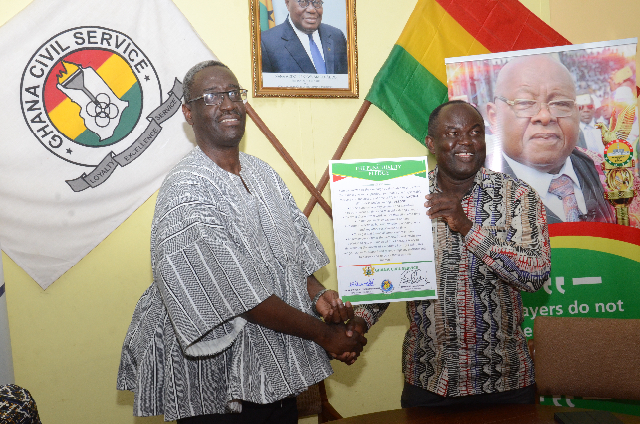 The head of Civil Service has called on public workers to change their attitude to work since they were the “fuel” for powering the private sector.

Nana Kwesi Agyekum Dwamena said mismanagement of time is one of the greatest resources going waste.

According to him, this has necessitated President Akufo-Addo’s call for the introduction of the biometric clocking of public servants to check productivity within the Service.

Endorsing the punctuality campaign by the Punctuality Public Education Campaign, he added that the Civil Service has developed service delivery brochures to guide the delivery of public services in a timely manner.

Convener of the campaign, punctuality crusader Emmanuel Amarquaye urged all Ghanaian workers to have a positive attitude towards work and service delivery.

He believes this would contribute greatly to the country’s development.

“Punctuality is about being on time and time does not exist in a vacuum but it is necessary to help us to measure everything that we do.

“It helps us to measure our progress, development and to meet our targets. It helps us to determine whether we are successful or not,” he said.

Mr Amarquaye noted the campaign was aimed at ensuring Ghana becomes the most efficient African nation in the world in terms of service delivery.

Recently, the outspoken Auditor-General Daniel Domelevo said there is a desperate need for a restoration of discipline in the public sector.

Related: Too many do too little in Ghana’s public sector – Auditor-General

Too many people in the country’s public sector, he said, do very little at work.

“For every one hardworking staff, several others do nothing,” Mr Domelevo said. He was delivering the third Kwadwo Baah-Wiredu Memorial Lecture in Accra Thursday.

He said there is a breakdown of discipline in many public institutions affecting service quality and delivery.

The Auditor-General was re-echoing repeated complaints about lack of diligence, commitment and dedication in Ghana’s civil service.

President Akufo-Addo in his inaugural speech on January 7, 2017, cited attitude to work as a major problem confronting the country.

The Punctuality Campaign is to whip up public consciousness to abide by time in support of the President’s call for Punctuality to work.