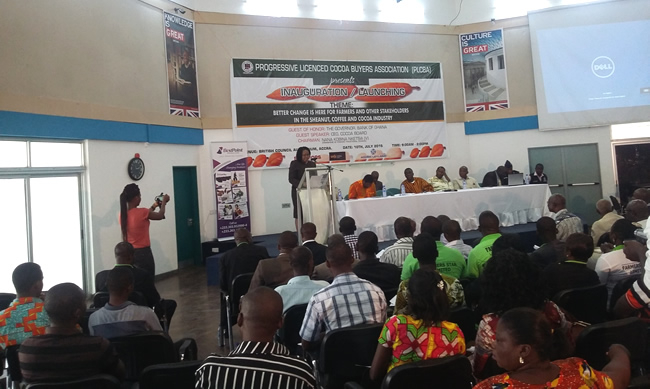 Cocoa farmers across the country now have something to smile about in respect of payments for their produce.

This is because telecom companies have launched a special Electronic Payment Platform for cocoa farmers, known as the “Cocoa Sika Platform” to facilitate rapid payment of monies to the farmers for beans purchased from them.

Farmers have over the years lamented the difficulty they are faced with in getting paid for their labour. Speaking to Joy Business at the launch, President of the Progressive Licensed Cocoa Buyers Association Samuel Anane said this is part of efforts to ensure that cocoa farmers do not lose their entitlements to purchasing clerks and District Officers.

He added that “District Officers and Purchasing Clerks in the sector have for a long time been disturbing this industry and they have to be eliminated. They have been swindling the cocoa farmers by not paying them full amounts to cover cocoa beans purchased. They usually ask them to go and return later for full payment, which never happens.”

Mr. Anane indicated that the Electronic Payment Platform if successful would contribute to the job-creation agenda of the country because when farmers are paid their due, it will make the industry attractive to young people thereby, absorb about 80% of the unemployment youth in the country. “If this happens the industry can produce over 1 million metric tonnes of cocoa annually,” he added.

The system has already been developed by the telecommunications companies and it’s ready for piloting.

Some cocoa farmers JOY BUSINESS spoke with welcomed the introduction of the platform saying, it will go a long way to help them reap the benefits of their labour – something they say has eluded them for a long time.

Paramount Chief of the Esikado Traditional Area, Nana Kobina Nketia who chaired the launch welcomed the introduction of the Electronic Platform saying it is a positive innovation that would help alleviate the problems associated with the farm-gate payments, the COCOBOD and other players in the cocoa industry.

He indicated that the farmer is key to the Ghanaian economy, hence anything that serves as a hindrance to the cocoa farmer should be eliminated.

Nana Kobina Nketia however, wants government to keep its promise to resume work on road projects in especially cocoa growing areas in the Western region to the benefit of the economy. He also called on Ghanaians to critically monitor governments in the area of road construction and report appropriately on both completed and uncompleted projects.

Ghanaians, he contended “easily believe people for what they say but that should not be the case because in the hypocritical world, deception rules and in the deceptive world hypocrisy rules, so we must verify everything we are told.” Projects that have been completed he said, “should be properly valued by competent people to ascertain the veracity or otherwise of any figures that are announced by governments.”