Council of State donates to inpatients of Bole Hospital 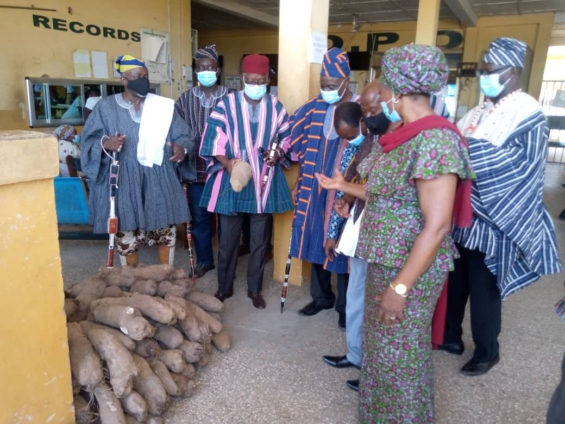 Members of Ghana’s Council of State led by Tumukuoro Babini Kanton representing the Upper West Region and three others have presented a bull and 100 tubers of yam to the inmates of Bole Hospital.

The gesture aims to put smiles on the faces of inmates during the Eid celebration in Bole in the Bole District of the Savannah Region.

Presenting the items on behalf of the Council, Tumukuoro Babini Kanton said the Council, from time to time, identifies institutions or entities to demonstrate compassion with on special occasions.

He said that “this time, the Council has identified the inmates of Bole Hospital to empathise with at the end of the month of Ramadan so that they also enjoy the festive occasion while on admission.”

The delegation also pledged its continuous commitment to the hospital in the discharge of its duty to ensure a healthy society.

He indicated that the mortuary, which has existed since the inception of the Hospital, has been closed down for the past 6 months and has outlived its usefulness and appealed to the delegation to carry their request forward to the President for redress.

Dr Nindow said that “currently, as we speak, our mortuary is down completely, and it’s a very key challenge to the district. In the region, we have three main hospitals, here, Damongo and Salaga, and this mortuary serves most of the areas.”

At the Palace, the delegation commended Bolewura Sarfo Kutuge Feso I and the Savannah Regional House of Chiefs for showing leadership in the fight against Environmental encroachers and encouraged them to do more to protect the citizenry and generation yet unborn.

“The Council has been following with keen interest from your representative about the giant and bold steps that the Bolewura and the Chiefs and Queens of Bole Traditional Area have taken and are still taking in the fight against Galamsey and the degradation of the forest cover of the land,” the told the Bolewura

DISCLAIMER: The Views, Comments, Opinions, Contributions and Statements made by Readers and Contributors on this platform do not necessarily represent the views or policy of Multimedia Group Limited.
Tags:
Bole Hospital
Council of State
Donations