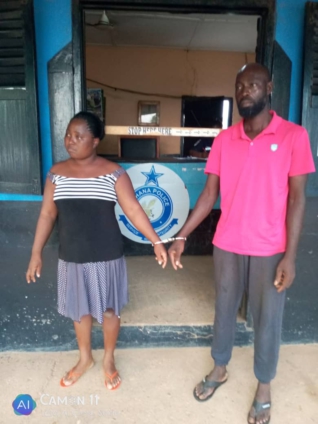 A couple is facing charges after the woman allegedly dipped the hands of an 11-year-old girl in hot water months ago and failed to seek medical help for her.

The victim is receiving treatment at the Ho government hospital with severe burns to both hands following the dastardly act by the foster parents with whom she lived at Kpong in the Eastern Region.

The couple is accused of not seeking medical attention after the victim was injured.

The Police commander disclosed that one Tawiah Sablah, 65 years accompanied by Seth Sablah, both residents of Wudome in the Volta Region and complainants in the case, brought the victim to the Kpong police station to lodge a complaint against Gameli and Vera for scalding the hands of the victim three months ago and refusing to seek medical attention for her.

A police medical form, Supt. Nyarko added, was quickly issued to the complainants for the girl to be sent to the hospital for treatment.

According to the police commander, investigations were still ongoing after which the suspects would be processed for court and the appropriate charges subsequently proffered against them.

DISCLAIMER: The Views, Comments, Opinions, Contributions and Statements made by Readers and Contributors on this platform do not necessarily represent the views or policy of Multimedia Group Limited.
Tags:
Akuse
Domestic Violence