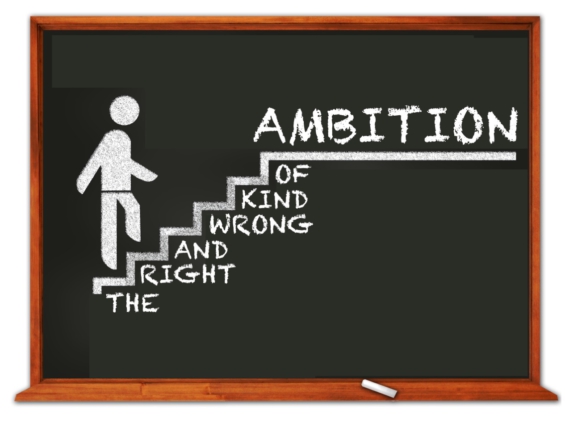 Sometime around the year 374 B.C., Isocrates, one of the most well-known teachers and rhetoricians in Athens, wrote a letter to a young man named Demonicus. Isocrates had been a friend of the boy’s recently-deceased father and wanted to pass on to him some advice on how to follow his father’s example.

The advice ranged from practical to moral – all communicated in what Isocrates described as “noble maxims.” They were, as he put it, “precepts for the years to come.” Like many of us, Demonicus was ambitious, which is why Isocrates wrote to him, because the path of ambition can be dangerous.

Isocrates began by informing the young man that “no adornment so becomes you as modesty, justice and self-control; for these are the virtues by which, as all men are agreed, the character of the young is held in restraint.” – Ryan Holiday, Ego Is The Enemy

Are you ambitious? By all means, be! But be careful what sort of ambition you entertain. There is ambition that is healthy and godly, and that which is unhealthy and ungodly.

Says Elvis Presley, “Ambition is a dream with a V8 engine.” But what if that big dream you were nursing only were carnal, worldly, vain and nothing else? Would it be pleasing to God, then?

Ambition, you see, can be a powerful ally or a destructive enemy. Misplaced ambition, reinforced with superficial desires, only leads to discontentment – sooner or later.

When we read Matthew 6:24, we see this kind of dissatisfaction with what life offers us on full display when the word of God tells us, “You cannot be a slave of two masters; you will hate one and love the other; you will be loyal to one and despise the other. You cannot serve both God and money.” If your ambition ends at or is focused on material things alone, what a wanton waste of God’s gifts that would be!

There’s nothing wrong with making money; but if you do make it, be sure to own it – rather than have it own you! The God who “equips” us with wealth also gives us a purpose for it. Nothing God gives is ever for an individual’s sole benefit, nor is it to be wasted.

Never! That is why Matthew 6:33 was given us by the Lord to steer our ambition in the right direction when it says, “Instead, be concerned above everything else with the Kingdom of God and with what he requires of you, and he will provide you with all these other things.”

My charge to you? Be ambitious, first and foremost, about God and what He requires of you – and everything else will be added to your godly gains. Your ambitions must be aligned with God’s will for your life. If they are not, whatever you do, though it appear brilliant for now, will be no more than wasted effort.

“AMBITION HAS ONE HEEL NAILED IN WELL, THOUGH SHE STRETCH HER FINGERS TO TOUCH THE HEAVENS.” -William Lilly

DISCLAIMER: The Views, Comments, Opinions, Contributions and Statements made by Readers and Contributors on this platform do not necessarily represent the views or policy of Multimedia Group Limited.
Tags:
Ambition
Benjamin Akakpo