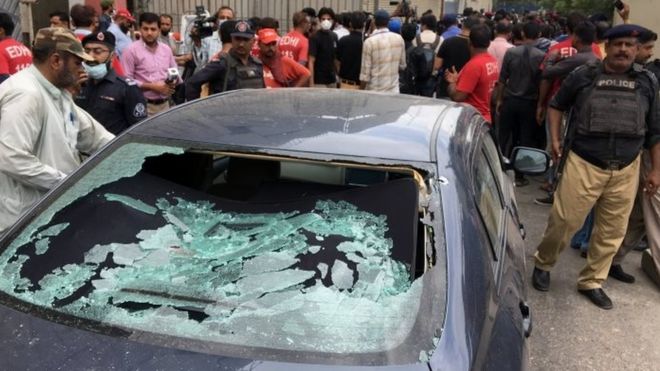 Gunmen have attacked the Pakistani stock exchange in the southern city of Karachi, killing at least two people and injuring others, local media report.

The assailants stormed the exchange after launching a grenade attack at the main gate to the building.

Militants from the Baloch Liberation Army say they were behind the attack.

Ethnic Baloch groups have fought a long-running insurgency for a separate homeland and a greater share of resources in Pakistan’s Balochistan province.

Pakistan has suffered years of militant violence, mostly by Islamist groups, but attacks such as this one have become rare in recent years.

‘They opened fire on everyone’

Monday’s attack began when the militants armed with automatic rifles threw a grenade and then began firing at a security post outside the stock exchange.

Guards fought back, killing all four attackers, the authorities say, but police officers and security personnel are feared to be among the casualties.

It is not clear if more assailants were involved and a search of the premises is continuing. The Pakistan Stock Exchange said in a statement that the situation was “still unfolding”.

Its director, Abid Ali Habib, said the gunmen made their way from the car park and “opened fire on everyone”.

Reports say most people managed to escape or hide in locked rooms. Those inside the building were being evacuated from the back door, Geo TV reported.

The stock exchange has offices for hundreds of financial institutions and is situated in a high security zone along with head offices of banks and other businesses.

DISCLAIMER: The Views, Comments, Opinions, Contributions and Statements made by Readers and Contributors on this platform do not necessarily represent the views or policy of Multimedia Group Limited.
Tags:
Abid Ali Habib
Pakistan