Debt Exchange: Government has not shown that the country is in crisis – Dr. Serebour 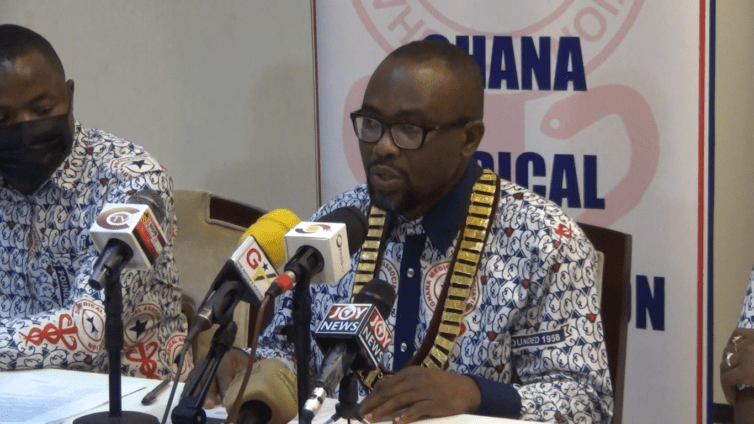 The President of the Ghana Medical Association, Dr. Frank Serebour, says the government has not shown that the country is in crisis, thus organized labour should not be coerced to face the brunt of the economic crisis.

He was speaking concerning the government’s debt exchange programme which has faced strong backlash from organized labour and civil society organsiations.

According to him, the failure of government to drastically reduce its expenditure by internalizing the austerity measures it seeks to impose on the general public was enough evidence to prove that the country might really not be in dire straits as being reported.

He noted that therefore, the government’s proposed application of the debt exchange programme on their pension funds is untenable and the Ghana Medical Association vehemently opposes it.

“Pensions in this country is very bad…If you take a look at the budget itself we’re told that the cedi has depreciated almost about 53%. Essentially if you have 1000ghana cedis currently, what you have actually in terms of value is less than 53%.

“And so if you look at our pensions that are already suffering and we’re going to go through this process of debt restructuring with even in terms of bonds yielding zero percentage points come 2023 and the 5% 2024 and then 10% and so forth and so on. It is quite a problem,” he said.

He noted that while the government was imposing austerity measures on the rest of Ghanaians, it was, on the other hand, still pursuing its vanity projects and maintaining its mammoth size.

“My own Ministry, which is the Ministry of Health, as we speak, three ministers, that is a substantive Minister and two deputies. Is there no way we can cut? So essentially government has not shown that we are in crisis.

“It is business as usual, and if you look at the budget as you indicated, everything else is increasing except the fact that the things that are supposed to affect worker and other citizens of Ghana they’re very happy to cut those things. Government flagship programmes, none of it has been affected.

“So essentially we don’t think that this is the time to use pensions as a leverage. Pensions at this time when clearly government has not demonstrated the fact that we’re in trouble. Clearly, we are not in trouble as far as we’re concerned so why come and touch pensions,” he stated.

Reacting to the Chamber of Corporate Trustees’ U-turn on the government’s debt exchange programme, Dr. Frank Serebour stressed that the GMA, as well as the rest of organized labour, will be sticking with the Chamber’s earlier stance.

The Chamber of Corporate Trustees had earlier opposed the government’s debt exchange programme, however, it has since backtracked on its stance and has instead called for negotiation between government and organized labour.

According to Dr. Serebour, any call for negotiation should be from the government and not from organized labour.

He said, the Finance Minister, and by extension, the government, has shown gross disrespect to stakeholders in the matter following their failure to engage them in any negotiations before announcing the policy.

As a result, the GMA and the rest of organized labour will continue to oppose the government’s planned debt exchange programme.

“And so I beg to differ from the position held by the Chamber of Corporate Trustees at the moment as you’re announcing to me that they’re willing to negotiate, I think the position should be clear. In fact we should not be calling for negotiations.

“Ideally it should have been the Finance Minister and I have said on several platforms that he doesn’t respect anyone that is the reason why he’s done what he has done. Otherwise how can you take this decision without involving the stakeholders and actually sitting at the table with them to at least pick their brains and find out how best we can resolve this issue and at least help this country?

“So I don’t subscribe to that, I think that Ghana Medical Association stands by its position that we don’t accept this and I’m sure that the other labour unions would hold the same view as I am holding this evening,” he said.

DISCLAIMER: The Views, Comments, Opinions, Contributions and Statements made by Readers and Contributors on this platform do not necessarily represent the views or policy of Multimedia Group Limited.
Tags:
Debt exchange
Dr. Frank Serebour