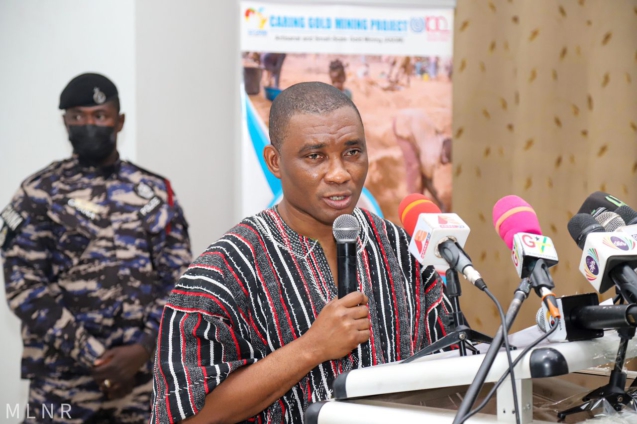 Deputy Minister of Lands and Natural resources, George Mireku Duker is urging the angry youth of Kenyasi to remain calm after a clash between the youth and Police officers guarding the Newmont Mine in the town claimed one life and injured four others.

The Minister has been visiting victims of the clash and assuring them of government’s resolve to find and punish those culpable to maintain peace.

Members of the Formed Police and Counter-Terrorism Unit stationed with the Newmont Mining Company are believed to have shot one person and injured four others in the ensuing struggle.

Twenty-six-year-old, Yaw Asamoah, is one of the victims.

He says the community acted on intel of a shooting incident and he fell victim to warning shots fired by duty officers.

He tells Luv News he sustained bullet wounds to his chest and some parts of his body.

Another victim, Anas Ibrahim said officials of Newmont Mining Company refused to come to his aid or take responsibility after the deadly encounter.

The Youth Organizer for Kenyasi Number 2, Kelvin Addai claimed 16 people have died in the community since 2004 when Newmont Company Limited was established there.

The Minister visited victims hospitalised at the Danhart Hospital in Kenyasi.

He hinted at the launch of an investigation into the incident and assured those found culpable would be brought to book.

DISCLAIMER: The Views, Comments, Opinions, Contributions and Statements made by Readers and Contributors on this platform do not necessarily represent the views or policy of Multimedia Group Limited.
Tags:
George Mireku Duker