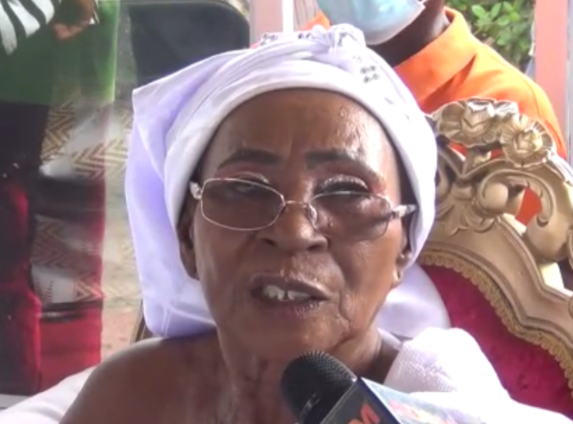 Commending the efforts of mothers on Mother’s Day, Queen Mother of Asinie, Akosua Pinamang has urged Ghanaians, especially the youth, to refrain from denouncing their mothers during their old age.

The traditional leader stated that the practice of tagging old women as witches should be stopped.

“Those who proclaim their mothers as witches, it is all up to them. Maybe because their mothers did not allow them to engage in whatever activity they wanted or live a free life could be why they do that.

“Those engaged in such act must stop. It is not necessary for us to be doing that. If your mother is indeed a witch, she would have killed you at birth. You wouldn’t even get the chance to grow,” she told AdomNews correspondent, Isaac K. Normanyo.

Reports on aged women being lynched or sent to witch camps have been a controversial matter in recent times with many calling on government to step in and rid the country of such canker.

One of the incidents that left many peeved was the gruesome murder of 90-year-old Akua Denteh, who was slapped, kicked and caned to death at Kafaba near Salaga in the East Gonja Municipality after being pronounced a witch by a traditional priest.

Akosua Pinamang also took the opportunity to advise mothers to be independent, strong and willing to endure challenging times in order to take care of their children.

Recounting her youthful days, she revealed that she had to endure many challenging economic trades to fend for herself and her children.

This she said taught her wards to be grateful for whatever they receive, be it meagre or not.

“So I advise all my women out there to take care of their children,” she stated.