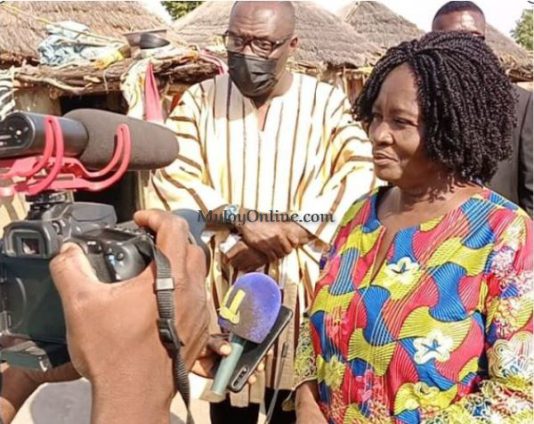 The 2020 Vice Presidential Candidate of the National Democratic Congress, Prof Naana Jane Opoku-Agyemang has described as an indictment on the conscience of our society, the continued stay of alleged witches camps in some parts of the five regions of the North.

She said the camps should not be left where it gets to a level people begin to think their existence is acceptable.

“Let us not get to a level where we think this is acceptable. Wherever we are, we must join forces to bring an end to this barbaric act,” she stressed.

ProfOpoku-Agyemang raised these concerns when she visited the Leli Dabari witches camp in the Gushegu Municipality of the Northern Region as part of her three-day visit.

The NDC 2020 running mate who presented items including rice, water, oil among other times to the women called for the abolishment of all the camps adding that all stakeholders must join hands in ensuring it succeeds.

“As a woman, I feel their pain and worry and therefore plead with the government to come to the aid of these women. Together let us disband this camp and move them back home to join their families,” she said.

She said she had been informed that reptiles continue to harass the women making life unbearable.

“I’m informed reptiles climb these short walls to harass these women at night. This is inhumane, some even live here with their grandchildren which is very bad,” she bemoaned.

It is estimated that about 1,000 women and 700 children are living in six of the alleged witches’ camps in parts of northern Ghana.

Many of these women who are elderly have been accused of inflicting death, misfortune, and calamity on their neighbors, families and in some cases their own children.

They are accused of using sorcery and witchcraft to conduct their activities.

Community members who accuse these women harm them and in some cases lynch them.

These women have had to seek shelter in these camps under very inhumane conditions.

Therefore there have been calls for the total disbandment of these but that is yet to see the light of day.