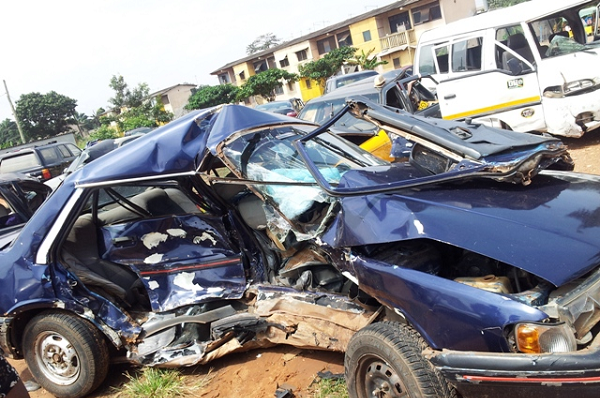 The infamous driver in the accident that claimed 34 lives at Dompoase junction early this year, was on Thursday, sentenced to five years imprisonment by the Cape Coast High Court.

The convict, Mireku Mark, 45, had earlier on Monday, June 8, been given a year’s jail term by a Circuit Court in Cape Coast on 34 counts of dangerous driving and negligently causing harm after pleading guilty.

The Circuit Court which banned him from operating as a commercial driver for life and also fined him GHS17,280 or in default serve two years in addition.

The Attorney-General’s Office in Cape Coast led by the State Attorney, Mrs. Joyce Odame prayed for a higher sentence.

Passing sentence, Justice Kwasi Dapaah told the convict whose demeanour was sober and gloomy, that; ‘your one mistake caused the lives of 34 people’.

The accident involving two 60-seater passenger buses traveling from the opposite direction on the Accra-Takoradi highway, on that fateful Tuesday dawn, claimed 34 lives including three children, and injured several others.

The deceased included 20 male adults, 11 female adults and three children two of whom are females and a male.

He was first arraigned at a Cape Coast Magistrate’s Court when he was discharged from the hospital on Thursday, January 17.

However, his Counsel, Mr John Benson raised an objection that the magistrate court had no jurisdiction to handle the case.

The court, therefore, discharged Mireku, but he was immediately re-arrested and brought before the Circuit Court, presided over by Mrs. Dorinda Arthur Smith.