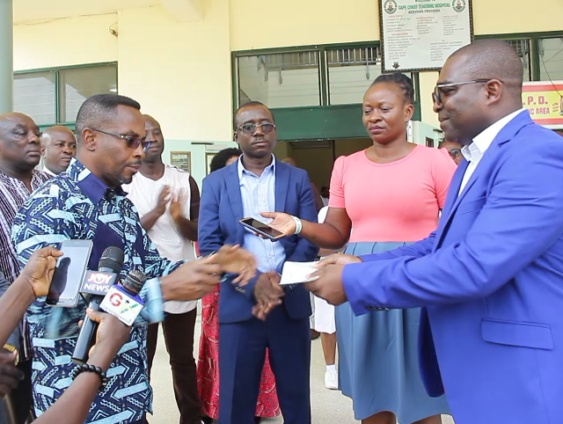 Central Regional Minister, Kwamena Duncan, on Wednesday, presented the cheque for GH¢97,450 to the management of the Cape Coast Teaching Hospital on behalf of the president

Government on Wednesday presented a cheque of nearly GH¢100, 000 to settle the medical bills of victims of the Dompoase accident that claimed 34 lives.

On Tuesday, January 14, two buses collided head-on killing at least 34 persons and injuring about 54 others at Dompoase on the Cape Coast -Takoradi stretch.

Consequently, the Chief Executive Officer of the Cape Coast Teaching Hospital directed that monies earlier paid by some of the victims be refunded once they provided their receipts while the hospital prepared a comprehensive report on patients including all those who would need surgical implants for onward submission for reimbursement.

Central Regional Minister, Kwamena Duncan, on Wednesday, presented the cheque for GH¢97,450 to the management of the hospital on behalf of the president.

“The monies were paid into the accounts of the Regional Coordinating Council and we are here to present the cheque to the hospital. This is a cheque of ninety-seven thousand, four hundred and fifty Ghana cedis,” the minister said and handed the checque to CEO of the Cape Coast Teaching Hospital, Dr. Eric Kofi Ngyedu.

According to Kwamena Duncan, government appreciates the role the hospital played to save the lives of the survivors of the accident. He assured government would do more to cover any other costs that might have been incurred by the hospital if it was brought to their attention,

“You marshalled the needed resources to take care of the victims of the accident. We realized how your facility was stretched in those times to support the victims.  That was commendable,” he praised.

CEO of the Cape Coast Teaching Hospital, Dr. Eric Kofi Ngyedu, thanked the government for honouring its pledge to the hospital. According to him, the hospital finds the redemption of the pledge by government inspirational.

“We thank the President for showing us such an inspirational leadership. We appreciate this gesture. On behalf of the victims of the accident, their relatives, we thank the president,” he said.