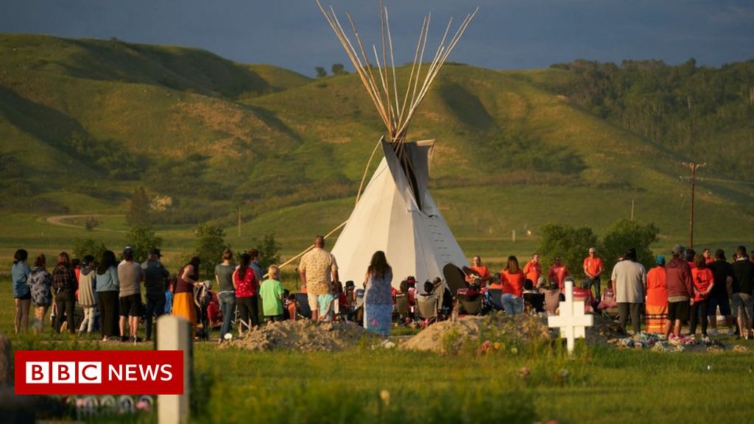 An indigenous nation in Canada says it has discovered evidence of 54 unmarked graves at the sites of two former residential schools in Saskatchewan.

It is the latest finding amid a wave that has triggered a national debate over the residential school system.

Indigenous investigations across the country have found evidence of more than 1,100 graves since last spring.

Just weeks ago, the Williams Lake First Nation announced it had found evidence of 93 unmarked graves on the grounds of St Joseph Mission, a former residential school.

These government-funded compulsory boarding schools were part of a policy meant to assimilate indigenous children and destroy indigenous cultures and languages.

Some 150,000 First Nations, Métis and Inuit children were taken from their families during this period and placed in these schools.

Survivors had long testified that children who died at the schools were buried in unmarked plots, now being rediscovered throughout the country.

Ted Quewezance, project leader of the Keeseekoose’s search, said ground-penetrating radar technology suggested there were 42 grave sites at the grounds of Fort Pelly Residential School, and an additional 12 at St Phillip’s.

“It was not that they could not hear, but [that] they did not believe our survivors,” he said.

Chief Lee Kitchimonia said that wintry weather would delay the investigation of the site.

“It’s going to be a very tough time… knowing we have unmarked graves in our community, where we walk every day, drive every day,” he said, according to CBC News.

“We passed by them, never realising that there were graves there.”

Fort Pelley was open as a residential school from 1905-13.

The St Phillip’s building was used as a boarding house for students from 1902-14 before it was shut due to poor conditions.

Both were in eastern Saskatchewan.

More than 130 residential schools were operated in Canada between 1874 and 1996.

Conditions inside the schools were abhorrent. School buildings were often poorly built, poorly heated and unsanitary, and children were subject to emotional, physical and sexual abuse.

At least 3,200 children died while attending a residential school, though advocates have said this number is likely much higher. Former TRC chair Murray Sinclair estimated some 6,000 children may have never made it home.