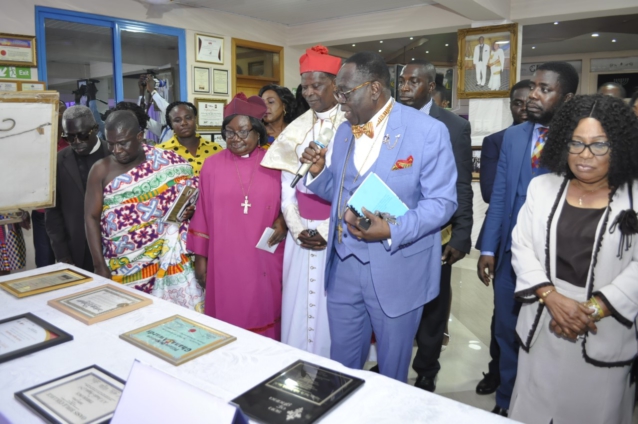 A grand ceremony has been held in Kumasi to commission a photo gallery at the Asafo-Agyei Hospital in Daaban, Kumasi.

Dr Asafo-Agyei Anane Frempong is recognised as the first Ghanaian doctor to qualify as an expert in the non-surgical treatment of piles.

The event brought together traditional rulers, the clergy, businessmen and the general public who took turns to appreciate the array of pictures displayed at the ceremony.

Welcoming guests, Archbishop Prof. Dr Asafo-Agyei Anane Frempong described the event as an important milestone in the establishment of the Asafo-Agyei Hospital and marks the culmination of the tremendous work done by management and staff of the hospital since its opening.

He particularly observed the numerous challenges faced during the establishment of the Piles Treatment Centre at the Asafo-Agyei Hospital that represented a change in the history of the hospital and explained that the international gallery being unveiled will provide the platform to share the success story of the hospital.

This, he said, should serve as a reminder of every individual’s obligation to humanity.

Archbishop Prof. Anane Frempong revealed that he entered the medical field with the motivation to help the vulnerable.

“This even informed my decision to go further and do research in the treatment of haemorrhoids (piles/’kooko’) which is a common health condition in our society and as the first Ghanaian Doctor to non-surgically treat the disease I will not renege on my promise to do further research to eradicate it from people,” he said.

He invited the general public to visit the Asafo-Agyei Hospital located at Daaban-Kumasi for free piles screening as he advised that early detection of the ailment was good to aid permanent cure.

He said his achievements will serve as inspiration for future generations.

“For a black man to innovate this piles (kooko) treatment shows what we the blacks can achieve something great if we believe in ourselves”.

“We should all be motivated by Archbishop Asafo-Agyei’s achievement by knowing that God created everyone special in his or her own way as such no one should underestimate himself but pray to God for the gift to manifest,” he said.

Archbishop Prof. Dr Asafo-Agyei Anane Frempong is well known for his invaluable contributions to the health sector of the country and the world as a whole. He is the first Ghanaian Doctor to qualify as an expert in the non-surgical treatment of piles in 1991. He is an anointed man of God and founder of the Great Eternal Harvest International Ministry in Kumasi.

The IBC, in May 2000, awarded him as one of its 2000 outstanding scientists of the 20th century and appointed him its Director-General for Africa in 2005. The Australian-Asian Institute of Civil Leadership (AAICL), which rewards and promotes excellence in leadership in various fields of endeavour, made him a fellow in 2006, which honour came with the conferment of an Honorary Distinguished Professor (Hon. FAAICL) on him.

Prof. Dr Asafo-Agyei received a ‘Medicine and Healthcare Award,’ in addition to an Order Medal and Edict, during the Inaugural World Forum at the Oxford University in July 2006, Pillars of Modern Ghana award for his exploit in the medical field, a global award at the maiden World Changers Summit held in Dubai for his novelty in treating piles and the International Diamond Prize for Quality Research-Vienna 2019 by the European Society for Quality Research.