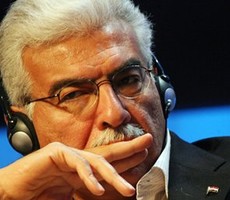 A court in Cairo has sentenced Egypt’s former Prime Minister Ahmed Nazif to three years in prison for corruption.

Nazif, who was Prime Minister from 2004 until last year’s uprising, has also been ordered to pay a fine of nine million Egyptian pounds (£900,000).

Last year he was given a one-year suspended sentence after he was charged for unlawful gains in a business deal.

Nazif is one of several Mubarak-era senior officials on trial.

He was arrested months after leaving his job in January 2011, shortly before President Hosni Mubarak stood down.

About a dozen former Egyptian officials, including Mubarak and his two sons, have been charged either with conspiring to kill protesters or with various crimes related to corruption.