Former army chief Abdul Fattah al-Sisi has been sworn in as Egypt's new president after winning elections in May by a landslide.

Security forces were deployed at key locations around the capital Cairo ahead of the ceremony at the Supreme Constitutional Court.

He has since been pursuing a crackdown on Mr Morsi's Muslim Brotherhood, which urged a boycott of the elections.

Liberal and secular activists, including the 6 April youth movement which was prominent in the 2011 revolution that ousted long-serving President Hosni Mubarak, also shunned the 26-28 May poll in protest at the curtailing of civil rights.

Mr Sisi, 59, was sworn in for a four-year term at a ceremony shown live on television.

At the swearing-in, the court's deputy head Maher Sami said that had not been a coup, and that Mr Sisi was responding to the will of the people.

Justices present for the ceremony applauded after Mr Sisi took the oath of office.

He replaces the outgoing interim president, Adly Mansour, who returns to his post as chief justice of the Supreme Constitutional Court.

In the May elections, he secured 96.9% of the vote and his sole challenger, left-winger Hamdeen Sabahi, received only 3.1%, according to the official results. 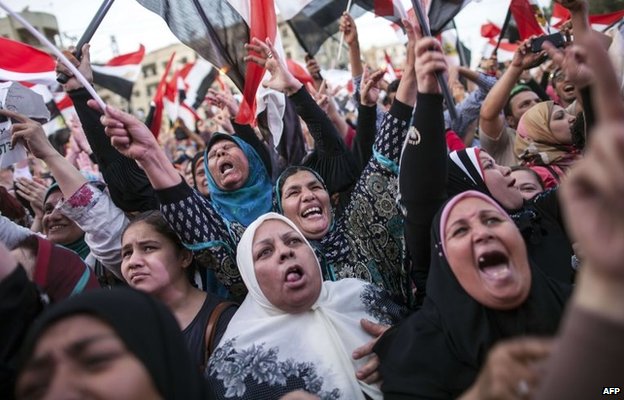 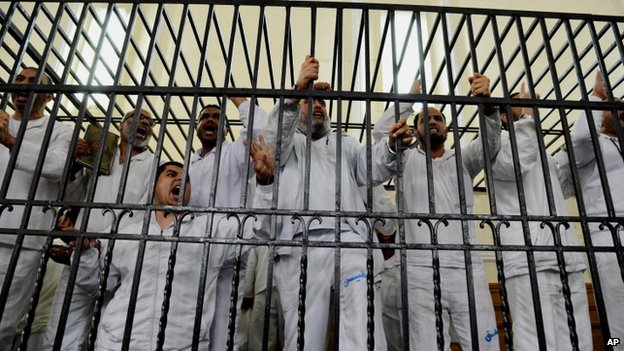 However, the turnout was less than 50%.

Despite this crowds are expected to flock to Cairo's Tahrir Square to celebrate his victory, the BBC's Orla Guerin in the Egyptian capital reports.

Mr Sisi inherits a nation that is divided and weary, our correspondent says. Experts warn that if he cannot deliver in the next year or two he could face a mass revolt, like his predecessors.

In a televised speech after the poll, he said he wanted "freedom" and "social justice", echoing the slogan of the 2011 revolution.

Who is Egypt's new president?

He said it was now "time to work", adding: "Our co-operation in work and construction will lead to prosperity and luxury."

He also faces a wide array of other challenges, including fixing the economy, preventing further political crises and easing poverty.

More than a quarter of Egyptians live below the poverty line – most in rural areas.

Mr Sisi has also promised to restore security in a country where attacks by Islamist militants have left hundreds of security personnel dead over the past 11 months.

The militants have stepped up attacks in response to the state's crackdown on Mr Morsi's Muslim Brotherhood and its allies, in which more than 1,400 people have been killed and 16,000 detained.

Mr Morsi and other senior leaders of the Brotherhood, which has been designated a terrorist organisation, are currently standing trial on a series of charges. They strongly deny any wrongdoing.

Critics fear that Mr Sisi will continue to show little tolerance for dissent.