The latest kidnapping happened on Sunday night in the village of Warabe, in Borno state. The girls taken were aged between 12 and 15.

On Monday, Boko Haram's leader threatened to "sell" more than 230 girls seized from their school, also in Borno, on 14 April.

Meanwhile, the US says Nigeria has accepted an offer of American help.

Mr Obama said the US aid was a combination of military, law enforcement and other agencies "who are going in, trying to identify where these girls might be". 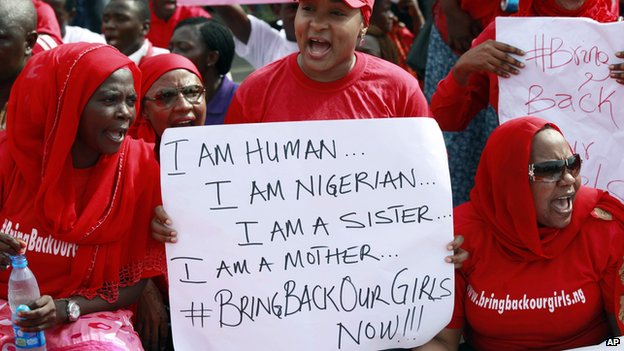 Protesters took to the streets of Abuja on Tuesday, calling for the girls taken on 14 April to be released

He described Boko Haram as "one of the worst regional… terrorist organisations".

"Obviously it's a heartbreaking situation, an outrageous situation. This may be the event that helps to mobilise the entire international community to finally do something against this horrendous organisation that's perpetrated such a terrible crime."

The insurgency by Boko Haram has left thousands dead since 2009.

The BBC's Mansur Liman in Abuja says the area around Warabe is a stronghold of the Islamist movement.

The gunmen arrived in two trucks and also seized animals and food from the village.

Communications are very poor in the area, which explains why the news took several days to emerge, our correspondent says. 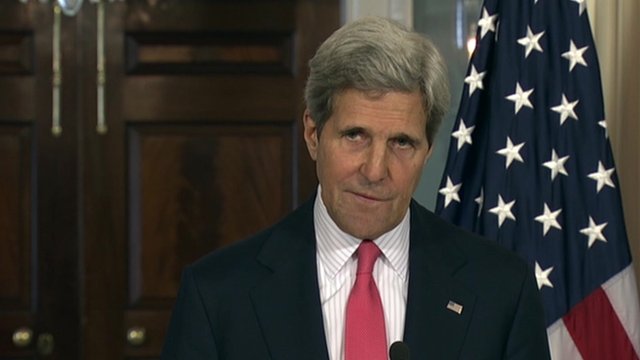 US Secretary of State John Kerry: "We want to provide whatever assistance is possible"

Residents from a nearby town told AFP that they feared Boko Haram would target them next.

"We have no security here. If the gunmen decide to pick our own girls, nobody can stop them," Peter Gambo said.

Warabe is also close to the Sambisa forest, where the first group of schoolgirls is thought to have been taken.

For the past one and a half years, Boko Haram has been carrying out kidnappings of girls but April's attack was on a much larger scale. It should also be noted that Boko Haram began this tactic when the Nigerian security forces also began kidnapping, or rather taking as prisoners, the wives and children of Boko Haram members.

On an operational level, Boko Haram is likely using the girls as human shields and keeping them in their camps, which will prevent the Nigerian air force from bombing those camps. Furthermore, there is also the potential monetary reward if Boko Haram can sell some of them back to their parents.

It's very likely that the girls have been split up into dozens of groups – maybe into twos or threes or fours. Any rescue effort will have to be done piecemeal and might take over a decade. When you look at Joseph Kony's Lord's Resistance Army in Uganda and the Democratic Republic of Congo, they seized some girls captive more than a decade ago. Some of them still remain captive, even though most of them have been freed or escaped.

Jacob Zenn is the African Affairs analyst at The Jamestown Foundation

Boko Haram leader Abubakar Shekau released a video on Monday confirming that his group had abducted them.

"God instructed me to sell them, they are his properties and I will carry out his instructions," he said.

Officials from the US State Department said there was evidence that some of the girls had been moved into neighbouring countries such as Cameroon and Chad.

There is growing concern, within and outside Nigeria, at the failure to locate the girls.

"It would be a mistake for the government of Nigeria to negotiate with these people. The most important thing is to defeat them, then negotiations can come after that," he said.

It has also attacked targets in the capital Abuja, with the deadliest attack so far coming on the same day the 200 girls were kidnapped in Chibok.

In that attack, at least 70 people died in a bomb blast in the suburb of Nyanya.