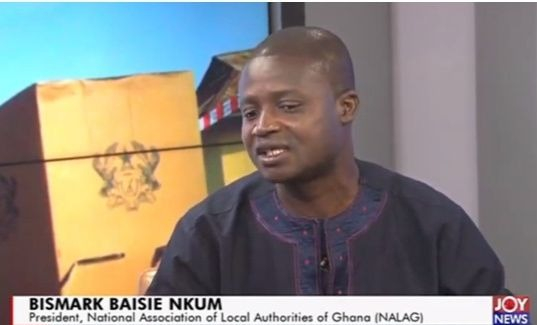 The President of the National Association of Local Authorities of Ghana (NALAG), Bismark Baisie Nkum says electing Metropolitan, Municipal and Districts Chief Executives (MMDCEs) will make them become autonomous and “can expand their scope”.

According to him, if MMDCEs are elected on party basis, it will keep political parties on their toes and eradicate the “one-man-takes-all” syndrome.

Mr Nkum says that appointed MMDCEs only become a representative of the central government and not the people at the grassroots level.

“All MMDCES in Ghana are now promoting Planting for Food and Jobs and Free SHS [Senior High School] because at the national level this is what the President wants to do and the President is the one who appointed them.

“So from where I sit, I am basically executing the agenda of the President because I have been appointed by the President,” he continued, the NALAG President told Roland Walker on the AM Show on JoyNews TV Monday.

A nationwide referendum will be conducted come Tuesday, December 17, 2019, to enable citizens to decide if an entrenched clause in the 1992 Constitution Article 55(3) needs to be amended to permit political parties in Ghana to participate in local government election.

A voter turnout of at least 40% and 75% Yes votes is required to affirm the government’s desire to amend the Article 55(3) in the Constitution.

While the government and some Civil Society Organisations (CSOs) are campaigning for “YES” vote, there have been calls by groups and individuals including the National House of Chiefs and opposition National Democratic Congress (NDC), who are canvassing for a “NO” vote.

Advancing his argument, the NALAG President cited Sierra Leone, which he said, imitated the practice Ghana’s decentralisation system but have extended it to electing of MMDCEs on political basis.

“Change is difficult, I admit. But this is what is happening across the globe and even those who are junior to us are even going further to decentralise their governance on a partisan basis,” he said.

According to him, local problems do not become a matter of urgency because they are aggregated to national issues.

He, therefore, urged citizens to vote “YES” to promote development in the local settings.

DISCLAIMER: The Views, Comments, Opinions, Contributions and Statements made by Readers and Contributors on this platform do not necessarily represent the views or policy of Multimedia Group Limited.
Tags:
Bismark Baisie
Elections
MMDCEs
NALAG