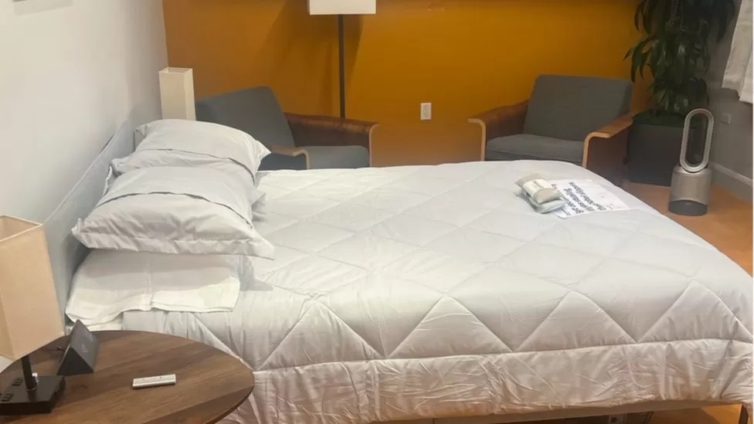 The BBC has been given photos of Twitter office space that has been converted into bedrooms, which San Francisco authorities are probing as a possible building code violation.

One image shows a room with a double bed, including a wardrobe and slippers.

An ex-worker said new Twitter boss Elon Musk has been staying at the headquarters since he bought the firm.

He last month emailed all Twitter staff saying they “will need to be extremely hardcore” to succeed.

San Francisco’s Department of Building Inspection has confirmed it is investigating potential violations following a complaint.

In a now-deleted tweet, Mr Musk posted that he would work and sleep in the office “until the org is fixed”.

The BBC has also been given pictures of sofas at Twitter being used as beds.

Another conference room has an alarm clock, and a picture placed over a made-up bed.

“It looks like a hotel room,” said one former worker. They went on to say that Mr Musk regularly sleeps at the Twitter HQ in San Francisco.

Last month Mr Musk – who completed his Twitter takeover in October – emailed all staff at the company saying they would need to work “long hours at high intensity”.

“Only exceptional performance will constitute a passing grade,” he wrote.

“It’s clear that he doesn’t really care about people. He doesn’t care about the people who work for him.”

A Department of Building Inspection official told the BBC’s US partner CBS News: ‘We need to make sure the building is being used as intended.”

In a reply to a journalist on Twitter, Mr Musk posted that the city should prioritise protecting children from the consequences of opioid drug misuse.

Forbes broke the story of “sad little conference-room sleeping quarters at the company’s recently depopulated headquarters”, noting it was an apparent improvement on the improvised sleeping-bag-on-the-floor arrangement posted on Twitter by one employee.

The bedrooms, Bloomberg reported, are also said to accommodate staff from Tesla and other Musk-owned businesses brought in to work at Twitter, “some of whom travel to Twitter for work meetings”, sources told the publication.

Department of Building Inspection official Patrick Hannan told the San Francisco Chronicle it investigated all complaints and there were different rules for residential buildings, even those used for short-term stays.

In May 2020, before Mr Musk’s takeover, Twitter told employees they could work from home “forever” if they so wished because its remote-working measures during Covid lockdowns had been a success.

DISCLAIMER: The Views, Comments, Opinions, Contributions and Statements made by Readers and Contributors on this platform do not necessarily represent the views or policy of Multimedia Group Limited.
Tags:
Bedroom
Elon Musk
Twitter headquarters