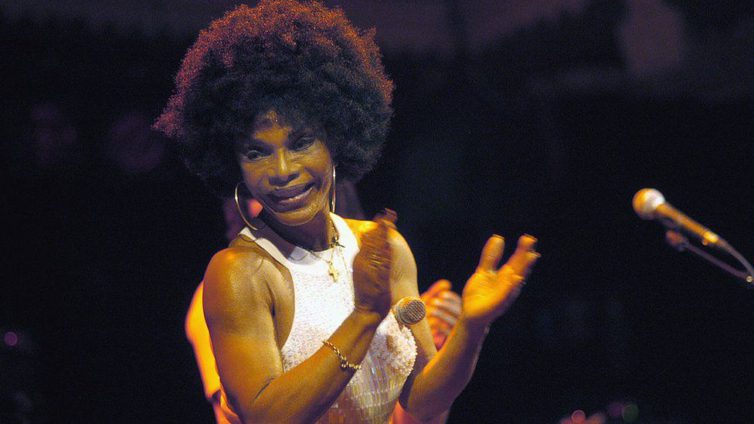 The celebrated singer, performing here in 2004, had a career that spanned more than six decades

Elza Soares, one of the greatest Brazilian singers of all time, has died aged 91 at her home in Rio de Janeiro, her publicist says.

Often called the queen of Brazilian samba, she released more than 30 albums in a career that spanned six decades.

Soares also used her music to campaign against racism and other forms of discrimination.

Her family said she died of natural causes and called her a musical icon who moved people with her voice.

“The beloved and eternal Elza has gone to rest but she will remain in musical history and in our hearts and those of thousands of fans all around the world,” their statement said. “As Elza Soares wanted, she sung until the end.”

Born into poverty in the favelas of Rio De Janeiro in 1930, much of Soares life was scarred by tragedy.

Her father forced her to marry at the age of 12 and within a year she had given birth to her first child.

She had seven children with her first husband, at whose hands she suffered frequent abuse, but the first two were born prematurely and died young.

Her husband died when she was 21 and she later confessed to stealing food to feed her young family.

She later married the Brazilian footballer Garrincha, with whom she had a son who died aged nine. The marriage lasted 17 years and she supported him during his battle with injuries and alcoholism at the end of his career.

But despite her personal hardship, her success as a musician spanned decades and her talent was appreciated by figures including the Queen, whom Soares met during a 1968 visit to Brazil.

The British Embassy in Brazil celebrated the meeting on Twitter, saying Soares had impressed the British monarch with her voice and presence and calling it “a meeting of Queens”.

An outspoken figure, she never forgot the racism she faced performing in bars and saloons during her early career, and has been celebrated for her work championing social and racial justice in Brazil.

“Racism still continues, but we are going to fight it and we will make progress. Racism is a sickness,” she said in an interview last year to mark her 90th birthday.

Her life and achievements have been celebrated by a host of figures across Brazilian society.

Brazil’s former president, Luiz Inácio Lula da Silva, said the country had lost not only one of its most potent voices “but also a great woman, who always defended democracy and good causes”.

The former Brazilian footballer Pelé, a teammate of her late husband, called Soares a “legend of our music, historic, genuine, unique and unparalleled. Today she leaves us, but in the heart, she will always be eternal”.

Meanwhile, Eduardo Paes, the Mayor of Rio, said that he will declare “an official 3-day mourning period in Rio for the loss of this great carioca! Woman! Warrior! Elza Live!”