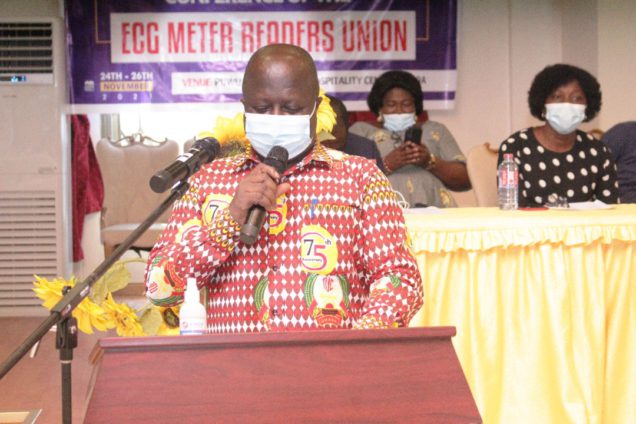 That is the General Secretary of PUWU, Mr. Michael Adumatta Nyantakyi

The General Secretary of the Public Utility Workers Union (PUWU), says PUWU has urged the Management of the Electricity Company of Ghana (ECG) to employ meter readers on a full-time basis.

Michael Adumatta Nyantakyi said the importance of the work of metre readers is critical and a good reason for the power distributor to employ them permanently rather than putting them on contracts.

Speaking to the press at the maiden National Divisional Conference of the ECG Meter Readers Union at the PUWU Conference and Hospitality Centre at Kasoa in the Central Region, Adumatta Nyantakyi believes permanent employment of the ECG meter readers will increase the workers’ commitment towards the job and also ensure they do their work more diligently.

According to him, the move will put an end to many of the illegalities since metre readers will be more dedicated and also avoid falling prey to the temptation to take bribes from customers for illegal connection of power.

“We have had meetings with the management of the ECG to explain the need to employ these meter readers on a permanent basis. We know how important the work they do is to the sustainability of the ECG.

“PUWU believes if the ECG takes steps to make metre readers permanent employees, their commitment levels will go up causing them not to fall for the many temptations on the field which causes huge losses to the company.

“This will also give the company full control over the meter readers which will be instrumental in putting together accurate bills which will cut down on the company’s losses,” Mr Nyantakyi reiterated.

For his part, the Director of Customer Service of the ECG, Abraham Anokye Abebrese disclosed that the power company is running at a 30 per cent loss which is making it impossible for the company to stay afloat with its revenue.

This, according to him, is as a result of the various forms of theft and illegalities.

Mr Anokye Abebrese, therefore, advised all ECG meter readers in the country to distance themselves from all forms of thefts and rather help the company catch individuals who are stealing from the company.

He urged the metre readers to report all forms of illegalities on the field so that the appropriate departments can follow up.

“Meter readers are very important to revenue collection for the ECG because they are the people who go to customers homes to check and bring us the data we use in billing. Meter reading is a very important function within the value chain of every utility company, with the ECG not being an exception. Indeed, meter readers have a lot of impact on our revenue, purchases, sales, and by extension our commercial loss management.

“They are also an important source of intelligent information for informed management decisions since they visit customers every month and are always abreast with what is happening on the ground. So we urge them to report any illegality they see on the field so we can follow up and reduce system losses,” he said.

According to him, plans are far advanced with management to change the name from Meter Readers to Customer Field Representatives.

“Management is looking at engaging meter readers as permanent staff and they will be called Customer Field Representatives. We are working on it and I am sure very soon it will come into fruition,” he stated.

Some meter readers who also spoke to the press said most of them do not have valid identification cards to serve as proof when they go on the field thus making it difficult for them to effectively discharge their duties since they are usually disrespected by customers.

They also indicated that they are often undermined by the company since they are not recognised as employees. The meter readers also lamented over their poor contract salaries which they said makes the job unattractive.