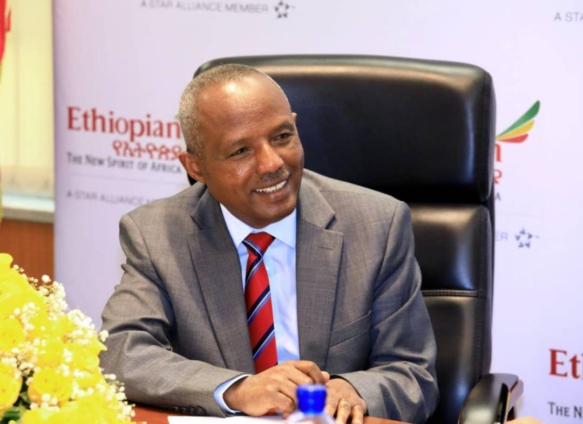 Also in attendance will be his board chairman, Girma Wake.

The programme is being organised by the Africa Prosperity Network and its partners, including the African Continental Free Trade Area (AfCFTA) Secretariat and the Government of Ghana, the host nation.

Dubbed the ‘Kwahu Summit’, the first of these annual dialogues will take place from January, 26 to 28, 2023.

Focusing on intra-Africa trade, the Africa Prosperity Dialogues bring together Africa’s political and business leaders to plan and work together on the all-important single market, the Africa Continental Free Trade Area (AfCFTA) project for the continent.

Confirming his participation via email, to organizers, Mr Mesfin Tasew Bekele said it is a delight for him to join such an important dialogue series aimed at fast-tracking the implementation of the Africa Continental Free Trade Area Agreement.

Mr Mesfin Tasew Bekele leads an organization which aims to become the most competitive and leading aviation group in Africa by providing safe, market-driven and customer-focused passenger and cargo transport, aviation training, flight catering, MRO and ground services by 2025.

Mr. Mesfin Tasew was appointed as the Group CEO of Ethiopian Airlines in March 2022. He joined Ethiopian in 1984 as Associate Engineer and progressed through the ladder and served in supervisorial and managerial positions in the Aircraft Maintenance and Engineering areas.

Mr Mesfin also serves as a member of the International Air Transport Association (IATA) Board of Governors. He holds BSC and MSc Degrees in Electrical Engineering from Addis Ababa University. He also holds a Masters in Business Administration (MBA) from Open University in the UK.

The Africa Prosperity Dialogues are symbolically dubbed the Kwahu Summit because the Kwahus of Ghana, the host nation, represent entrepreneurship and trade and are known to support each other to excel in business. Kwahu is also the highest elevation of habitable land in Ghana.

The organisers of the Kwahu Summit aim to support through enhanced intra-Africa trade, the elevation of Africa and her people to the highest summit of human living, dignity and prosperity.

The 2023 Africa Prosperity Dialogues is the first of what will be an annual event being organised by the Africa Prosperity Network (APN) and its partners, which include the Africa Continental Free Trade Area (AfCFTA) Secretariat located in Ghana, the Presidency of the Republic of Ghana (the host nation of AfCFTA).

The other partners are; United Nations Development Programme (Africa), the Africa Prosperity Fund, the Ghana Investments Promotion Centre (GIPC), the Economic Commission for Africa (ECA) and the Africa-America Institute.

The Summit will bring into practical focus the continent’s critical challenges and industrialisation priorities and advance aggressively the commercial and infrastructural interventions to achieve the vision of creating the largest single market in the world of some 1.4 billion Africans.

The Kwahu Summit is a Pan-African economic platform which brings together the great minds and mights of Africa, both in Africa and the Diaspora, to think, plan and work together to expedite the implementation of the agreed initiatives within the AfCFTA and shape the Africa Agenda for Action.

The business and policy leaders’ dialogues which will take place on 26 – 27 January 2023, will be held at the Safari Valley Resort, in Adukrom, on the Akuapem Mountain.

On January 28, 2023, the Peduase Presidential Lodge in Aburi, Akuapem Mountain, will host the presidential and business executives’ dialogues.

DISCLAIMER: The Views, Comments, Opinions, Contributions and Statements made by Readers and Contributors on this platform do not necessarily represent the views or policy of Multimedia Group Limited.
Tags:
Africa Prosperity Dialogues
Ethiopia Airlines boss
Mesfin Tasew Bekele