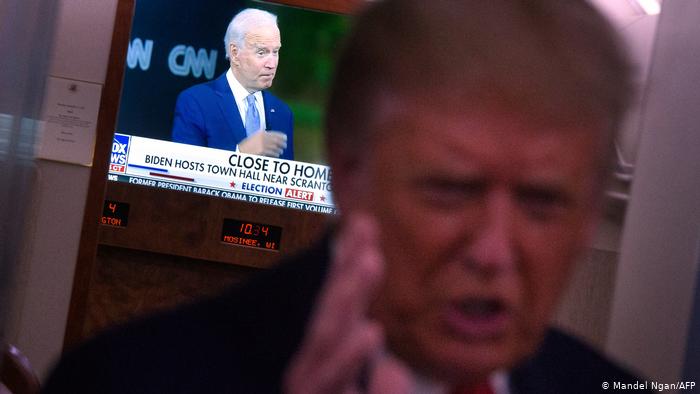 With key states still up for grabs, the US presidential election is anything but decided. Foreign policy experts point out that, no matter the outcome, the European Union must be willing to go its own way.

Americans — and the world — woke up on Wednesday to an election battle that was still being fiercely fought by both sides.

With millions of votes left to be counted in several key battleground states, President Donald Trump falsely claimed victory in an early-morning address at the White House.

“This is a fraud on the American public,” Trump said, threatening to take the fight to the Supreme Court. “We will win this. As far as I’m concerned, we already have won.”

Trump has refused to confirm whether he will accept the results of the election, and claims the vast number of mail-in ballots — many still to be counted, and which some analysts have said could significantly boost the Democratic Party — could be used to rig the results against him.

The campaign of Democratic challenger Joe Biden has slammed Trump’s attempt to stop the count, calling it a “naked effort to take away the democratic rights of American citizens.”

“It’s not my place or Donald Trump’s place to declare the winner of this election. It’s the voters’ place,” Biden wrote on Twitter. But the former vice president remained confident of victory, saying he believed the Democrats were “on track to win this election.”

We feel good about where we are. We believe we are on track to win this election.

EU needs to take charge of its destiny

Across the Atlantic, EU leaders also spent the day following the vote tallies. Most of the major players have so far declined to comment on the developments, though Slovenian Prime Minister Janez Jansa prematurely congratulated Trump on his possible reelection.

It’s pretty clear that American people have elected ⁦@realDonaldTrump⁩ ⁦@Mike_Pence⁩ for #4moreyears. More delays and facts denying from #MSM, bigger the final triumph for #POTUS. Congratulations ⁦@GOP⁩ for strong results across the #US ⁦@idualliance⁩ ⁦ pic.twitter.com/vzSwt9TBeF

The German government has said it will not comment before final results are announced, but Defense Minister Annegret Kramp-Karrenbauer expressed concern in an interview with German broadcaster ZDF.

“This is a very explosive situation. This is a situation that can lead to a constitutional crisis in the US, as experts are rightly saying. And it is something that must cause us great concern,” she said.

Ian Bond, director of foreign policy at the Centre for European Reform, said the US was still “a long way from a constitutional crisis.” But, he told DW, no matter the outcome of the 2020 election, the EU was going to have to start relying less on US leadership on the world stage in the years to come.

“Europe is going to have to work out how to do more things for itself,” he said, pointing out that even if Biden does end up winning the presidency he will inherit a host of domestic issues that will demand his attention, among them the “rampaging coronavirus epidemic” and a probable Republican-controlled Senate that will block him at every turn. “The amount of bandwidth that he is going to have to devote to Europe is probably going to be quite limited,” he said.

That message seems to have hit home for some observers in the European Parliament, including liberal MEP Guy Verhofstadt. “Whatever the outcome, the EU needs to take its destiny into its own hands,” he wrote on Twitter.

Looking at the chaos across the Atlantic, I’m more certain than ever that Europeans are stronger together in an uncertain world.

Whatever the outcome, the EU needs to take its destiny into its own hands. 🇪🇺 #ElectionNight

Franziska Brantner, the German Green party’s leading parliamentarian on European affairs and Verhofstadt’s former colleague in Brussels, told DW that the EU would find common ground with a Biden administration on issues such as climate protection and fair competition in the digital industry. But she also stressed that it was important for Europe to chart its own course.

“We as Europeans are better advised to take care of our own sovereignty and invest in this, [regardless of] who win[s],” she said. “We as Europeans have to watch for ourselves and also watch that we defend the basis of our democracy, which is social cohesion and equality.”

Bond agreed, saying the EU had to “start thinking in more geopolitical terms” when it came to investing and making policy. “Europe has profound interests at stake in the rise of China, in what happens in Africa, and what happens in the Middle East,” he said.

That advice is even more important in a possible second Trump term. The current president has not hidden his disdain for the European Union, arguing that the EU had been set up to “take advantage of the US” and that the bloc was “worse than China, only smaller,” according to former national security adviser John Bolton.

‘Germany has to be willing to take on more responsibility’

Bond said a second Trump administration — especially if the president resorts to the Supreme Court to settle a disputed election by invalidating votes for his opponent — had the potential to further entrench existing divisions within the EU.

“It would send the message to autocrats and would-be autocrats in Europe and elsewhere that if you can get the court system in your favor, then you can pretty much do what you like and there will be no consequences,” he said. And, although Trump has never enjoyed much popularity in the European Union he has found admirers among populist leaders, including in Poland and Hungary.

Four more years of Trump would also further erode the NATO defense alliance, Bond said. “NATO’s deterrent value will diminish because America’s president is clearly unwilling to defend all treaty allies,” he pointed out in an analysis ahead of the election.

“At best, Trump would defend countries like Poland that he perceives as sharing his world view. Many European states will have no choice but to curry favour with him, as long as the EU itself remains an ineffective defence player,” he wrote.

Based on events so far, the night’s big winners in the US election are Xi Jinping & Vladimir Putin. Even if Biden squeaks out a narrow victory, Xi & Putin will have a divided, introspective and dysfunctional US to deal with. US allies in Europe & Asia had better be prepared!

To counter this threat, Bond called on Berlin to take on a greater role in world affairs. “Germany has to be willing to take on more responsibility for Europe in the world,” he told DW. “It’s no longer possible just to be the economic powerhouse of Europe and to leave the defense of the world to the Americans, because they may not be able or willing to take that on.”

DISCLAIMER: The Views, Comments, Opinions, Contributions and Statements made by Readers and Contributors on this platform do not necessarily represent the views or policy of Multimedia Group Limited.
Tags:
European Union
US Election