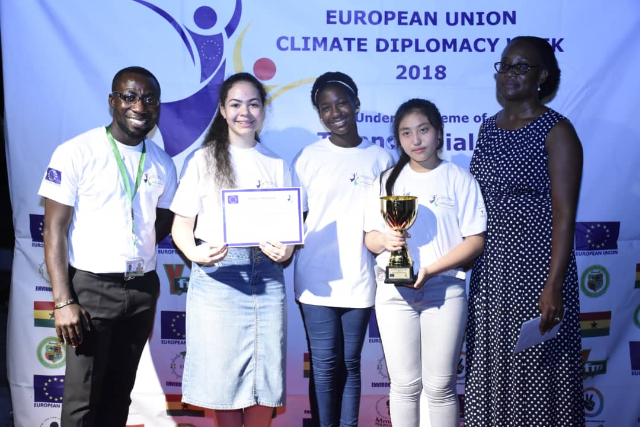 The European Union Delegation Ghana has celebrated the Climate Diplomacy Week 2018 award ceremony, in collaboration with Environment360, at Alliance Française in Accra.

The ceremony, which was marked with an art competition, was organized to aid basic school pupils appreciate what Climate Change is and how to incorporate in their daily lives.

This is to reinforce what they have been taught, the 3Rs; Reduce, Reuse and Recycle.

Prior the final ceremony, an art seminar was organized for five private schools in Accra for a period of three week.

The students were also tasked to create works related to this year’s theme for celebrating Climate Change; Talanoa Dialogue; inclusive, participatory and transparent.

After a critical analysis of the art works by the jury, American International School emerged winners of the EU Climate Diplomacy Week 2018 Art Competition.

The team made up of Brianna Odame-Amponsah, Allanah Pearl Sisco and Chialrielle-Chun Villanoeva Wu came up tops as they won the first position.

“Our project focuses on different races and ages coming together and making a positive impact on the world's environment” the elated teacher said after their victory.

GIS placed second place with a central idea of gathering a community to dialogue about Global Changes through infotainment.

Pupils Soraya Hamidu, Kimberly Dedjoe and Magdalene Mensah were guided by one of their art teachers Sulemana Abdul Rauf.

The representatives of the British International School with a project centered on the world having a chat on a mobile phone about Climate Change were second runners up.

The art works of the top three schools will be displayed at the offices of the European Union Delegation in Accra.

The Norwegian Ambassador will also host the winners at a private exhibition at their residence in Accra.

Present at the event was the Ambassador for the EU Delegation to Ghana, Diana Acconcia who emphasised on the need to strengthen the Climate Change fight together to protect the environment.

“You, children present here, will be the adults we are today in 2050. We, all together, will have to cope with the consequences of climate change.

“We, the adults today, are responsible for the world we will be leaving to you…we have still the possibility to fight together climate change and mitigate its most dangerous consequences,” Ms Acconcia said.

The Executive Director for Environment360, Cordie Aziz, emphasized on how important this competition is, as it empowers the students to better understand what climate change is, where we are now and where we want to be in future.