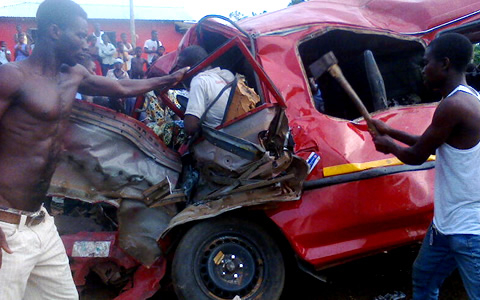 Two people died on the spot, while many others sustained severe injuries when a Toyota land cruiser collided head-on with a Hyundai H-100 at Nankese-Ningo on the Koforidua-Suhum highway, Sunday evening.

The Land Cruiser was travelling from Koforidua to Suhum.

A traumatised eye witness who gave her name as Enyonam said the Hyundai vehicle was travelling at top speed.

Residents and good Samaritans had to cut through the mangled vehicles to rescue the injured.

Personnel of the Suhum Ghana National Fire Service and the Ambulance Service were able to rescue the driver of the Hyundai H-100 and a female passenger who were trapped and were unable to be rescued by the public.

Meanwhile the Eastern regional commander of the Motor Traffic and Transport Department (MTTD) of the Ghana Police service, Chief Superintendent Samuel Tetteh has told Joy News seven other persons have died in separate motor accidents in the Eastern Region over the weekend.

He said on Saturday about 1.30am at New-Jejeti, a Mercedes-Benz Sprinter  travelling from Kumasi to Accra also burst one of its front tyres and somersaulted several times.

He explained that one person died on the spot, while three others died on their way to the hospital.

Mr Tetteh added that one other person died at Akropong after falling from a truck loaded with crates of Coca-Cola when the driver negotiated a sharp curve.

He disclosed that a man riding a motor-cycle without a helmet also died after crashing a stationery vehicle, adding that an eight year old girl was also knocked down at Donkorkrom in the Affram-plains district by a speeding vehicle killing her instantly.

‘’Between Saturday and Sunday alone nine persons have died from accidents. This is a worrisome situation which ought to be investigated thoroughly’’.

Mr. Samuel Tetteh cautioned drivers to desist from travelling late in the night and at dawn since the highways may be foggy resulting in poor visibility.