Feature: The scourge of malnutrition - MyJoyOnline.com

Feature: The scourge of malnutrition 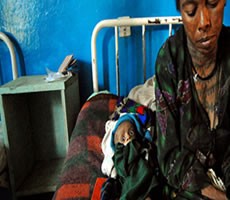 Getting out of bed at about 4:00 GMT is often a fierce bout between the comfort of my bed and the unvarying series of hike. This occasion was no different as I woke up to a foggy atmosphere against the clucks of the hen and the purrs of my little pussy cat. Yes! At one point I felt they were curious to know what I was up to that dawn. It was just one of my early morning exercises. With my shoe buckled up and my headphone on I was ready.

Having done fifty-six minutes of pleasure, I chanced upon a fairly aged woman who had in her arms a twenty-seven month old baby wrapped in a cluttered flimsy blanket. Out of curiosity, I halted and took a regular pace towards her and greeted to which she nodded as the baby lie in solemn repose. From that close range, I could tell the baby was insalubrious.

Looking haggard, gaunt and virtually sagging in her nappy, little Afi gently opens her bulging eyes. Afi nudges forward as if to tell mummy all was not well. At that moment, it was a palpable reality mummy was oblivious of Afi’s condition as the scourge of malnutrition badly took its toll on the helpless girl. Like Afi, many valetudinarians incur the wrath of malnutrition.

The upper west region (UWR) in northern Ghana is one of the country’s most deprived regions and has high child malnutrition and mortality rate according to the 2003 Ghana Demographic Health Survey (GDHS). The report further states: 26% of children in the region as underweight, over 34% stunted while in 11% have acute malnutrition. The situation is no different in some parts of Africa. In Zimbabwe, a UK-based agency reports that acute child malnutrition has increased by almost two-thirds in 2008 and concludes that “some children were wasting away from lack of food.” Indeed, the millennium Declaration calls for special attention to Africa as more than 41% of people living in the sub-Saharan region live a little lower than one-dollar a day which culminates to about 32% being undernourished.

It is against this background that former United Nation secretary- general; Kofi Annan chastised African leaders for mismanagement of Africa’s abundant resources. He considers the plundering of these resources as a basis of Africa’s misery. But is there more than passing the buck on governments? Poverty engenders a series of scourge on the continent. This public health problem turns up creating more poverty; figuring conspicuously in this vicious cycle is the scourge of malnutrition.

From a birds’eye view, malnutrition is simply a manifestation of a society’s inability to produce its livelihood adequately. It could be also seen as inadequate food absorption or inadequate food intake and absence of all component or substance required to make food essential for life. Malnutrition occurs from conception to the child’s second birthday.

The growth of a baby in the mother’s womb is the first point at which the effect of poor diet is felt. A significant proportion ofbabies are born with low birth weight. After two years of age it’s much harder to reverse the effect of chronic malnutrition. Poorly nourished children may show symptoms that may include: lethargy, apathy, and irritability among others. It could get even worse as the brain development of the child is shattered. So it is prudent for expecting mothers or children under age two to secure nutritious diet. Babies depend on the provision of adequate nutrition; for newly born, breast milk (considered the ideal for babies) or bottled milk will satisfy their quest for nutritious diet.
According to one London-based nutritionist, Dr.Miriam Stoppard, babies grow most rapidly during the first six months of life and most babies double their weight in around four to five months. A significant number of breast fed babies see tremendous growth as they adhere to their nutritional needs. They are often less prone to illness such as: gastroenteritis, chest infections and cancer.

Certainly appropriate nutritional needs will yield tremendous growth and make food essential for life; what children and adults eat may affect their nutritional status and their health. Well-nourished children are more alert and attentive as compared to poorly nourished children who may be quiet, withdrawn and hyper-active mostly as a result of inadequate amount of calories, protein, fat, carbohydrate, vitamins and minerals.

In the developing world, an estimated 230 million children under age five are chronically malnourished and about 54% of deaths among children younger than age five are associated with malnutrition. Malnutrition is a major concern when it comes to public health and development issues. In sub-Saharan Africa, the prevalence of malnutrition among the group of under- fives is estimated 41%. Chronic malnutrition is usually measured in terms of growth retardation.

The former Director General of the Ghana Health Service, Dr. Agyeman Badu Akosa, described the high malnutrition rate in the country as “unacceptable”. With under-nutrition causing 50% of deaths in children. According to the former Director General, sections of underweight children below age five in the country rose from 22%-28% between 1993-2003 while those with stunted growth increased from 26%-28% .

This means close to one out of every three children suffers from the effect of long-term or periodic inadequate food intake. Studies conducted among the elderly in Accra showed a high prevalence of malnutrition of 48%. 77% of children under five and about 45% of Ghanaian women of child bearing age suffer from anemia as a result of iron deficiency- a G.N.A news report indicates. The news agency further reports of 86,000 child deaths as a result of vitamin A deficiency in 2005. A U.K-based agency reported that some children in Zimbabwe were “wasting away from lack of food” as there was shortage of 18,000 tons of food indicating that over 50% of the country’s populace was in dire need of food.

Once war torn country, Liberia records high level of child malnutrition as 41.8% of children younger than five are stunted thus according to the 2010 report from the United Nation’s World Food program. Stunting, a manifestation of chronic malnutrition means not only delayed growth but a weakened immune system, reduced intelligence quotient and even irreversible brain damage. The status-quo in some developing countries highlights poverty and food insecurity as one critical factor underlining malnutrition.

Liberia tops a list of poor countries that records high number of malnourished children. Putting lives at risk. Liberia imports more than half of its food and struggles to introduce large-scale farming. To add salt to injury is the bane of inflation. The Zimbabwean economy has for the past period recorded an all-time high inflation in the world, making the national currency gallop out of control. In 2008, a report by the UK-based agency suggest two-third increase in child malnutrition as a result of shortage of food, inadequate clean water, lack of education among others.

A major examination of malnutrition as biological translation of social disease is often conditioned by the overall policies that govern national economies (both internal and international). This major determinant explains most malnutrition in societies with capitalist or pro-capitalist mode of production.

Nutritional vulnerability is a manifestation of a society’s inability to produce its livelihood adequately. Under-developed societies struggle for their own livelihood partly because of inadequate logistics for agricultural produce. In the long run, the fight against hunger and malnutrition becomes an eminently political struggle rather than a technical one.

Teenage mothers highlight another bane that cripples good nutrition. Most early mothers are ill-equipped to cater for their children. Cape coast, Ghana recorded the highest rate of teenage pregnancy. With 39% of girls already mothers or pregnant by age eighteen what’s more, 15% of fifteen to nineteen year old women in the coastal region are under nourished which intends compromises a child’s health even before birth. In some northern part of Ghana (Sisala), mothers out of sheer ignorance attach spiritual connotation to being malnourished.