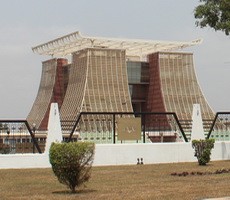 An all-female contingent from the Ghana Army Forces has taken over guard duties at the Flagstaff House.

The change in guard, the first for 2015 coincided with the second anniversary of President John Mahama's term in office.

She, like her male colleagues before her, is expected to keep the seat of the presidency safe and will be held responsible for any security breach.

The change of guard at the presidency, initiated by President John Mahama in May 2013, rotates security duties among the three arms of the Ghana Armed Forces- the Army, Navy and the Airforce.

Marking his 2nd year in office as President of Ghana, John Mahama inspected the Guard of Honor and observed proceedings from afar.

The all-female Ghana Army contingent took over from the Ghana Air Force who have been at post for three months.

Pupils from the Flagstaff House barracks were allowed to observe proceedings.

They received bookmarks from the president with inscriptions urging them to work for Ghana with all their hearts.

This is the 14th change of guard at the Flagstaff House since its inception in 2013.

President Mahama later departed Accra for Assin Senchem in the Central Region where worked on a cocoa farm owned by a young man, a move aimed at encouraging the youth to venture into agribusiness.