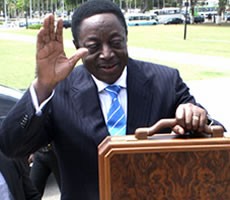 The rising public sector wage bill poses a major threat to current economic stability and gains made over the years. That’s the worry of Finance Minister, Dr. Kwabena Duffour.

Speaking at the 2012 consultative group annual partnership meeting and multi-donor budget support with the country’s development partners on Monday, Dr. Duffour however says government is working to manage the situation.

Meanwhile, the country’s development partners say though they are pleased with how government has managed its finances, it still has issues with its expenditure.

However, the development partners who form the multi-donor budgetary support program have pledged a little over 400 million dollars for programs outlined in the 2012 budget.