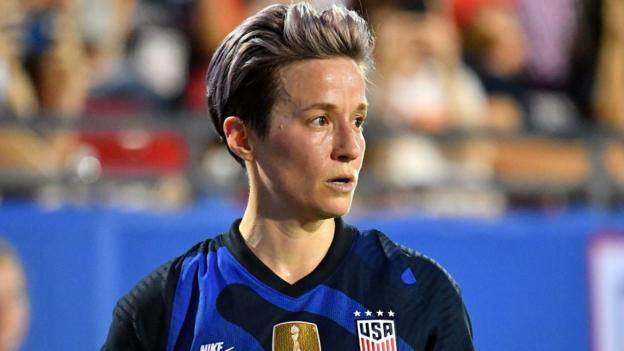 The United States women’s football team’s bid for equal pay has been dismissed by a court, with the judge rejecting the players’ claims they were underpaid compared to the men.

The lawsuit was filed by 28 women’s national team players last year against the US Soccer Federation (USSF).

Molly Levinson, the players’ spokeswoman, said that they planned to appeal against the decision.

“We are shocked and disappointed,” said Levinson. “We will not give up our hard work for equal pay.

“We are confident in our case and steadfast in our commitment to ensuring that girls and women who play this sport will not be valued as lesser just because of their gender.”

Joe Biden, the presumptive Democratic nominee for US president in this year’s election, told the team to not “give up this fight”, adding: “This is not over yet.

“To US Soccer: equal pay, now. Or else when I’m president, you can go elsewhere for World Cup funding.”

Federal judge Gary Klausner allowed the players’ case for unfair treatment in travel, housing and medical support to go to trial, which is set for 16 June in Los Angeles.

Giving its ruling, the court said: “The women’s team has been paid more on both a cumulative and an average per-game basis than the men’s team over the class period.”

The US team won the Women’s World Cup last summer for their fourth title overall. They have also won five Olympic gold medals.

After the equal pay claim was dismissed, striker Megan Rapinoe, who won the Golden Ball and Golden Boot at last year’s World Cup, tweeted: “We will never stop fighting for equality.”

Fellow US striker Alex Morgan said: “Although disappointing to hear this news, this will not discourage us in our fight for equality.”

The USSF said it wanted to work with the team to “chart a positive path forward to grow the game both here at home and around the world”.

Its statement added: “US Soccer has long been the world leader for the women’s game on and off the field and we are committed to continuing that work.”

Former USSF president Carlos Cordeiro resigned in March after lawyers for US football’s governing body made submissions as part of the lawsuit in which it was claimed that the job of a male footballer on the national team “requires a higher level of skill based on speed and strength” than their female counterparts.

Before they played Japan in the SheBelieves Cup on 12 March, the US players turned their tops inside out during the warm-up to hide their badges, leaving only the four stars which represent their World Cup successes on show.

The US men’s team made the World Cup quarter-finals in 2002, while their best finish was third place in the inaugural tournament in 1930.

The women’s case had been publicly supported by male players, and in February the US men’s team issued a statement criticising the governing body, saying that “the federation continues to discriminate against the women in their wages and working conditions”.

DISCLAIMER: The Views, Comments, Opinions, Contributions and Statements made by Readers and Contributors on this platform do not necessarily represent the views or policy of Multimedia Group Limited.
Tags:
Football
US Women team