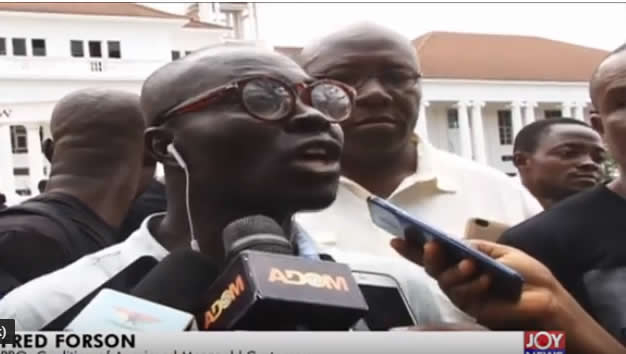 For several scores of Menzgold clients, there is no interest in the state’s criminal prosecution of the CEO accused of defrauding them of millions.

Their money first. Fred Forson, one of the leaders in the agitations to get their locked up investments back. Government has put the figure at 200million cedis.

And this is what these clients who have come to the circuit court want government to remain focused on.

That is why Kofi [not his real name], travelled from Kumasi to lurk around the circuit court in Accra and hear the outcome of day two of the hearing.

At the first hearing, the police were keen to keep Nana Appiah Mensah popularly known as NAM1 from the public eye and basically sneaked him into the court so early: 6:30 am.

Kofi explained to JoyNews’ Joseph Ackah-Blay that at this second hearing, seeing NAM1 had a reassuring feeling that their cause will prevail.

“Lo and Behold, I saw him when he was entering,” he said.

He thanked God for NAM1’s return from Dubai after he was wrongfully arrested but later acquitted of charges of defrauding a company Horizon Diamonds Royal DMCC in a $39m gold deal gone bad.

That money can “pay even 80% of the customers”, he shared in the joy of the socialite’s victory in court in Dubai.

The next step is staying out of cells in Ghana. And “God being so good to us, he has been granted bail”, Kofi felt triumphant.

As long as NAM1 is not in police cells and as long as he expects to get his money from the Dubai company back, “I know for sure that our money will come into our pocket”.

The only sentence he repeated twice.

No, Menzgold was not a Ponzi scheme, he insisted against the description of financial analysts.

“I believe he was doing a legitimate business”, the man who said he was into mining at Tarkwa in the Western region.

Explaining his understanding of NAM1’s business, Kofi said NAM1 buys gold at a low price and sells it high on the world market.

This helps him to pay the 7% to 10% monthly returns Menzgold promises its clients who deposit gold collectibles sold to them by another of NAM1’s company, Brew Consult.

Another customer much farther from Kofi’s base in Kumasi was also in court. Kwasi, not his real name, said he came from Tarkwa in the Western region.

“People who murder have the right to be granted bail”, he praised the bail decision. The Dubai experience of NAM1 has proved he is innocent after staying in cells there for the six months of the trial, he explained.

“He needs support and that is why we came all the way from Tarkwa to this place”, Kwasi revealed he was not alone.

“We are trusting good that after today, the processes will begin for a payment plan for customers to get our monies”, he dreamed big.