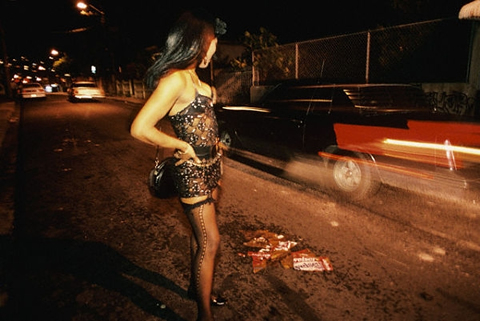 The Anti-Human Trafficking Unit of the Police Service, has arrested two suspected human traffickers in Accra.

Both are Nigerian women in their mid-twenties who were picked up by a Police Patrol Team after they were named by their victims.

Four of the victims, who are also Nigerian, have been rescued during a police patrol Wednesday. They were spotted by the Police at Abeka-Lapaz in Accra and are under police protection.

They said, they were brought into the country by the suspects with the promise that they will be engaged in domestic work.

But their traffickers forced them to engage in prostitution.

According to JoyNews’ Daniel Dadzie, before engaging in prostitution, their traffickers demanded armpit and pubic hair for rituals.

The rituals, he said, is meant to "bind them" to do prostitution.

Supt. Mike Baah of the Anti-Human Trafficking Unit told JoyNews there is sufficient reason to suspect this was an organized crime which involved many other people.

Last March, two Nigerian women were also arrested by the police for allegedly trafficking six women from their country to Ghana, for prostitution.

The suspects, Ify Mba,33, and Amanda Eze Chioma, alias Faith, were reported to have told the victims from Abia, Delta,Enugu and Anamora states in Nigeria, aged between 21 and 26 years, that they were sending them to Germany and Dubai to be employed as househelps.

The leader of the gang, only identified as Angel, is on the run, and being sought by the police.

The suspects on arrival at Ghana, were said to have made their victims swear oath to engage in prostitution at some nightclubs at Baastona in Accra, and each was expected to pay 555,000,00 Naira (equivalent to $2,000) to the suspects.