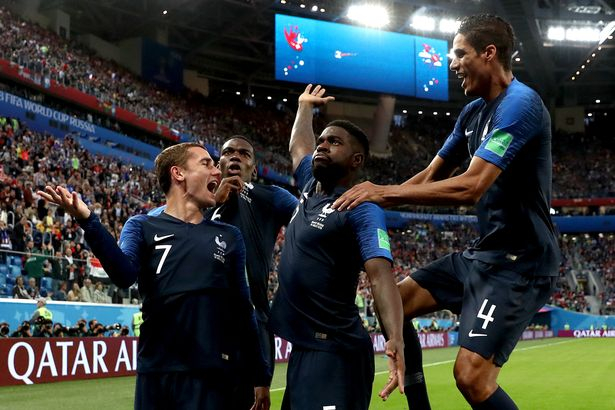 France will play in the World Cup final for the first time since 2006 after beating Belgium 1-0 thanks to a goal from Samuel Umtiti in St Petersburg on Tuesday evening.

Here are eight things we learned.

In the first minute, danger man Kylian Mbappe went on a dazzling run on the right flank. He just went pass Kevin De Bryune as if De Bryune wasn’t there. On paper, De Bryune was to play on Belgium’s right wing as part of a 5-man midfield in a 3-5-2 formation. After Mbappe’s daring first minute run, Eden Hazard went to the right wing as he possesses a relatively better defensive ability than De Bryune. Quick thinking there by Roberto Martinez.

Roberto Martinez’s tactical change [3-5-2] was to cope with France’s domineering midfielders. It was a great move to prevent the French from gaining total midfield control.

The French set-up in a rather conservative manner. After going a goal up, the French sat deeper as they set up in an almost 6-4-0 formation. The shape varied into a 6-1-3/ 5-4-1/4-3-3/4-5-1 depending on where the Belgians had overloads. Stephen N’zonzi and Youri Tielemans were brought on at the latter parts of the game to provide more cover for the French defence.

After going a goal down, Martinez brought on Dries Mertens and Yannick Carrasco for Moussa Dembele and Marouane Fellaini. The idea was clear. The French were defending in their numbers which meant that the Belgians needed more men upfront as well as width.

ROMELU LUKAKU FAILS TO GET INTO THE GAME

As much as Lukaku tried, he just couldn’t find a way to make his presence felt. He was unable to find his way into the game and he would definitely have wished for a more dominating performance.

France has proven beyond every reasonable doubt that they know how to win a football match. The sheer intelligence with which they play is remarkable. Every move on the pitch is almost perfect. They know when and how to press, drop off, defend and attack. Deschamps has really done a good job and his side progress into the finals as the favourites.

KYLIAN MBAPPE IS A HANDFUL TO CONTAIN

Kylian Mbappe has proved to be too hot to handle and it was no different today. Marouane Fellaini, Jan Vertonghen and Moussa Dembele found it very difficult to cope with Mbappe’s blistering pace. Mbappe also proved to have some dirty tricks up his sleeves as he picked up a yellow card for time wasting.

THE REIGNITED THREAT OF SET-PIECES

How many times haven’t we seen teams score from set pieces in this world cup? This world cup has brought back the long forgotten strategy of winning via set-piece efficiency.