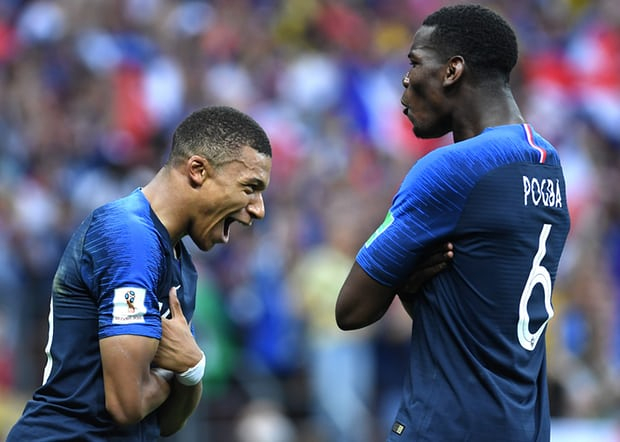 France won the Fifa World Cup for the second time by overcoming Croatia's bold challenge in a thrilling final in Moscow's Luzhniki Stadium.

Didier Deschamps' side repeated the success on home soil at France '98 by a margin that hardly looked possible as Croatia stood toe-to-toe with the favourites for an hour.

Here are 14 things we learned from the final game of what has been an exciting World Cup.

It is official…….If you want to defeat France in a football match then make sure Antoine Griezmann doesn’t score. The record is now 19 wins and 2 draws for France in games in which Griezmann has scored.
BOTH TEAMS WERE TACTICAL
In the first half, both teams perfected their trade. France was resolute in their defending whiles the Croats were also enterprising and kept possession of the ball very well.
CROATIA DOMINANT BUT UNFORTUNATE
Sometimes, football turns out to become something else. Per the first half, Croatia was dominant and dictated the pace of the game effectively. France barely threatened. However, football spoke…….Mandzukic scored and own goal and Perisic conceded a debatable penalty which was slotted in by Griezmann. For the record, France didn’t come up with any chance of their own in the first half. Possession-wise, Croatia was in control as they had 61% ball possession as opposed to France’s 39%. The trend followed in the second half.
MBAPPE SILENCED
Croatia’s tactical disposition in the first half ensured that Kylian Mbappe didn’t have opportunities to have a go at their defence. The lively speedster was silenced throughout the first half.
MBAPPE COMES TO LIFE
Croatia needed to score and so they pushed their defensive line higher up the pitch. That gave Kylian Mbappe the space he needed to come to life……..and he did come to life. He played a crucial role in France’s third goal and lashed in a wonderful strike for France’s fourth goal.
THAT WAS CLASSIC FRANCE
France did to Croatia what they did to Argentina. We have talked about France’s quick transition from defence to attack and that third goal just reminded us of that.
LLORIS…….SHHHHH
What sort of tramadol was Hugo Lloris on? What was he thinking? He attempted to dribble Mandzukic despite Mandzukic being fairly far away from him. The showoff backfired as he handed Mandzukic and Croatia their second goal.
FRANCE’S SECOND HALF STRATEGY
After going 4-1 up albeit against the run of play, France did what we have seen them do all tournament long. They dropped off, stayed compact in the middle and forced the Croats wide. With their height in defence, the French dealt very well with Croatia’s aerial balls.
…….AND THE CROATS WON BATTLES BUT LOST THE WAR
Croatia came back from a goal down to win against Denmark, Russia and England en route to the finals. France was too hot to handle as the Croats couldn’t perform their normal ‘comeback’ magic and succumbed to a 4-2 defeat.
DESCHAMPS SITS AT THE TABLE OF MEN
Didier Deschamps joins an elite table of men which includes Franz Beckenbauer and Mario Zagallo as the only men to win the world cup as both a player and a coach.
MBAPPE’S MILESTONE
Kylian Mbappe becomes the second teenager ever to score in a world cup final, joining Edson Arantes do Nascimento [Pele].
OLIVIER GIROUD’S WEIRD STATS
………….Olivier Giroud lifts the world cup trophy, albeit without scoring any goal. You wouldn’t want to read this……..Giroud didn’t also manage a single shot on target in his 546 minutes of world cup football.
“OBIAA WO NE MASTER”
In 6 games against France, Croatia hasn’t recorded any victory. The Croats have lost 4 times and drawn twice.
FRANCE PLAY INTELLIGENT FOOTBALL
Throughout the tournament, France has exhibited a rare tactical and game management intelligence. They know when to press when to drop off, when to increase the tempo of the game as well as when to slow down the tempo of the game. Deschamps has been immense…..obviously, he learnt a lot from that EURO 2016 final defeat to Portugal.
Tags: