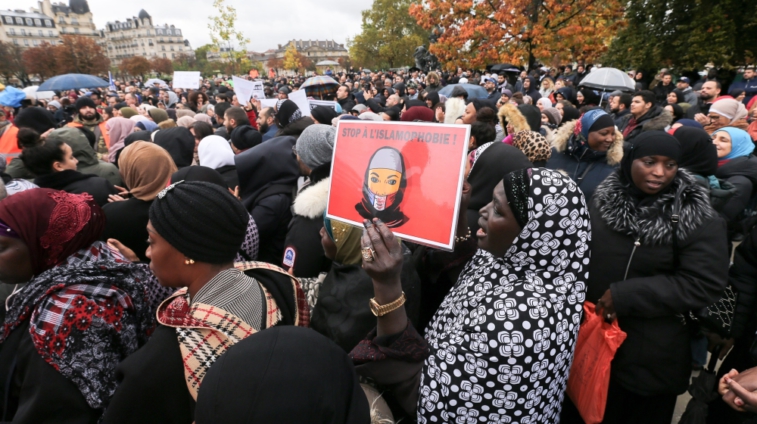 A woman holds a placard reading 'Stop Islamophobia' as she takes part in a gathering in Paris [File: Michel Stoupak/NurPhoto via Getty Images]

Last week, a member of French President Emmanuel Macron’s La Republique en Marche (LREM) party walked out of a National Assembly hearing, saying the presence of a veiled student went against the country’s secular values – a stunt which has renewed a debate over the hijab.

“As a Member of Parliament and a feminist, committed to Republican values, to laicite and women’s rights, I cannot accept someone who enters a National Assembly hearing wearing a hijab, which for me remains a mark of submission,” Anne-Christine Lang wrote on Twitter shortly after leaving the hearing mid-session.

The student, 21-year-old Maryam Pougetoux, was representing a student’s union during a discussion on how to minimise the effects of the COVID-19 health crisis on young people.

Wearing the hijab is banned in French schools and for public servants at their workplace. A woman holds a placard reading ‘Stop Islamophobia’ as she takes part in a gathering in Paris.

France’s decades-longfeud over the hijab is couched in terms of the country’s tradition of laicite, a strict form of secularism which, among other things, bans people from wearing religious symbols in public schools.

“In France, we think all religions are equal and shouldn’t be in the public space,” Alexis Poulin, a political analyst and founder of the news site Le Monde Moderne told Al Jazeera.

But according to Poulin, Lang’s interpretation of the law went too far.

“What she did was a purely political move,” Poulin said. “It’s not written anywhere that you are forbidden to enter the National Assembly with a veil.”

“I can understand if you’re against the veil and what it represents, but at the same time we need to respect the women who wear it,” Lazaar said. “Some wear it by choice, others do it because it’s imposed on them, but we should be fighting those who are imposing it, not the women who wear it.”

But others, such as socialist party member Segolene Royal, supported Lang.

“[Pougetoux] knows what she’s provoking,” Royal told BFMTV. “Fortunately, she has the right to provoke in our society, but at the same time there are limits … there are rules.”

The affair follows another recent debate earlier this month, on social media, which erupted when a French journalist tried to draw a connection between a food video by a Muslim woman wearing a hijab to the September 11, 2001, attacks in the US.

Waintraub’s comment provoked an outcry by many people in France and was formally condemned by prominent French Muslims and politicians on both sides of the spectrum.

But after she received some death threats, several prominent politicians came to the journalist’s defence, including France’s Interior Minister Gerald Darmanin.

“Whatever the disagreements, some of which are profound, I strongly condemn the death threats [Waintraub] has received,” Darmanin posted on Twitter.

Fatima Bonomar, a prominent feminist, responded to Darmanin’s tweet in defence of Boune: “A word for the student who had to read thousands of racist comments against her, was equated to murderers via the unacceptable post of this ‘journalist’ which reinforced the wave of hatred against her … her only fault being a video about her cooking activities?”

“I read every one of your very touching messages,” Boune wrote. “Your love and gratitude overshadow their hatred … I am a student who tries to help 100,000 students every day. I don’t have the time or energy to give to these cruel people.”

France’s Muslim community, about 5 million people, comprises about 10 percent of the population, the largest Muslim minority in Europe.

Following a similar controversy last year, which involved a far-right politician asking a woman to remove her hijab, French President Emmanuel Macron decried what he called the “stigmatisation” of Muslims, warning against linking Islam with “terrorism”.

DISCLAIMER: The Views, Comments, Opinions, Contributions and Statements made by Readers and Contributors on this platform do not necessarily represent the views or policy of Multimedia Group Limited.
Tags:
Europe
France
Hijab
Islam
Stop Islamophobia