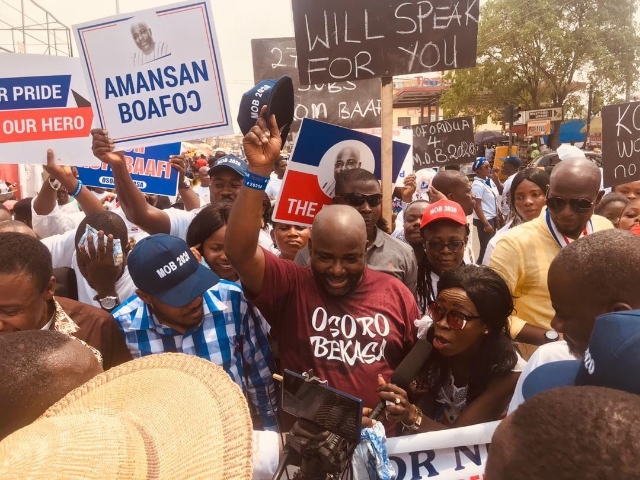 Chief Executive of the Ghana Free Zones Board, Michael Okyere Baafi, will be the only aspiring Member of Parliament (MP) to challenge the incumbent New Juaben South MP, Dr Asibey Yeboah, in the New Patriotic Party (NPP) primaries slated for April this year.

Four years ago, Mr Baafi was the only aspirant challenging Mr Yeboah, and the tough encounter that characterised that contest for the constituency in 2016 is expected to repeat during this year’s encounter.

But this time, Mr Baafi is confident of kicking out the incumbent MP.

In what political connoisseurs in the constituency have predicted to be one of the hottest during the primaries, Mr. Okyere Baafi is believed to be enjoying support from the Presidency.

Speaking to a large group of NPP supporters after successfully filing his nomination form in Koforidua, Mr Baafi reiterated his pledge to serve his constituents through party development and his contributions on the floor of Parliament.

He believes he is well cut out for a job that requires credibility and care for the least in society.

He told journalists after filing his nominations that his decision to contest is due to “the incompetence of our MP, the people see him to be selfish and inept.“

Michael Okyere Baafi was appointed to Head the Free Zones Board by President Nana Akufo-Addo after the NPP won the 2016 election.

He is a member of the Chartered Institute of Marketing, UK and has over 10 years’ experience in insurance marketing.

DISCLAIMER: The Views, Comments, Opinions, Contributions and Statements made by Readers and Contributors on this platform do not necessarily represent the views or policy of Multimedia Group Limited.
Tags:
Dr Asibey Yeboah
Free Zones
Michael Okyere Baafi